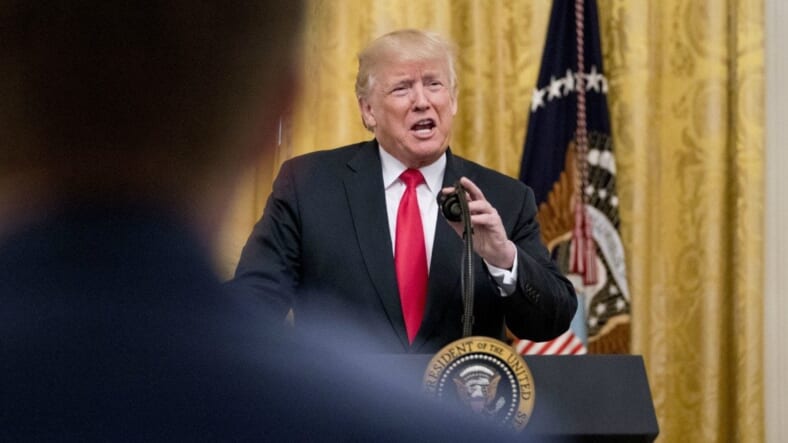 The journalism community is stepping forward to defend three Black women journalists who President Donald Trump insulted and condescended to during his much-talked-about White House press conference earlier this week.

“They can take insults – they don’t need me sticking up for them,” Baldwin said. “But still, there is something so wrong with this. It is beyond disturbing. It is ugly, and I’m angry.”

Baldwin described Trump as a bully who “loves to punch,” but said the situation with the three women took that a step further. “This feels personal,” Baldwin said.

Baldwin said on Twitter that there was something “SO wrong” with the fact that three of the people he spoke to badly during the press conference were Black women, and that she had to speak up.

“These women have conducted themselves with the utmost respect,” Baldwin said on the air. “The person who apparently has none? The president.”

During his two-hour press conference focused mostly on the general election, Trump called Ryan “nasty” and a “loser,” insinuated that Alcindor was “racist” for asking a question about nationalism and said Phillip “asks a lot of stupid questions.” The comments came during a particularly contentious news conference in which the president joked about not being able to understand the accent of a Turkish journalist and volleyed insults at CNN’s Jim Acosta that resulted in that journalists’ White House credentials being revoked.

The National Association of Black Journalists, headed by a Black woman, also stepped in to defend the three journalists, released a statement Friday saying it was “appalled” at Trump’s conduct and called on the president to rectify his behavior.

“The NABJ is calling on the president to stop his verbal assault on Black women journalists and all journalists, and to provide truthful answers instead of insults,” the statement read.

Said NABJ President Sarah Glover in a statement, “The most powerful man in the free world is verbally abusing journalists. The past two years have been filled with assault on the media and Donald Trump’s comments this week have reached an all-time low with attacks on three Black female journalists. His dismissive comments toward journalists April Ryan, Abby Phillip, and Yamiche Alcindor are appalling, irresponsible, and should be denounced.”

President Trump has not responded to the tensions regarding the news conference.

Among the multiple journalists President Trump has insulted this week, three of them are black women: @Yamiche @AprilDRyan @abbydphillip There is something SO wrong with this. I had to speak up: pic.twitter.com/HdyCX28l8T