EXCLUSIVE: Michelle Williams and Chad Johnson on sharing their journey to the altar with the world 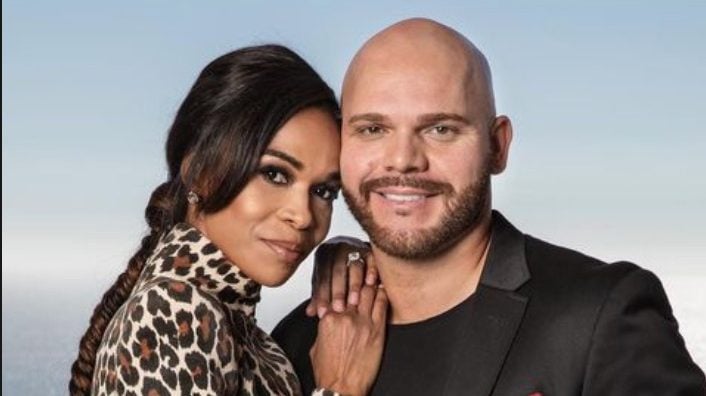 Destiny’s Child made Michelle Williams a household name when she joined the group in 2000 and she has made headlines in recent months for revealing her battle with depression and getting engaged to youth pastor, Chad Johnson.

Their OWN show, Chad Loves Michelle, documents the couple’s journey to the altar and shows them navigating the treacherous waters of addressing mental health issues in a way we haven’t ever seen on the small screen.

We caught up with the adorable pair to find out why they decided to share this intensely personal time in their lives with the world.

“Many times you have great ideas and then you have to really research the idea and think about the pros and cons and it seemed like there were more benefits to us opening up about our journey to marriage than cons,” Michelle Williams says in an exclusive interview with TheGrio. “Knowing it’s on OWN and the network would take great care of us and being executive producers being able to collaborate on this project is a blessing.”

While Williams may be used to the limelight, Chad Johnson admits the constant presence of cameras was an adjustment.

“It’s one thing to adjust to the camera when you’re on a set or something but it’s a whole other thing to adjust to a camera being in your personal space. It took me a few weeks to settle into it and relax and not be worried that everything I said was politically correct,” he explains. “It took some getting used to but I feel like I got in my groove and realized there’s so much film time to get so little TV time. Once I got used to it I started enjoying it.”

Another thing the couple had to consider before inviting the world into their lives was the inevitable backlash from haters on social media. While Michelle may be used to the never-ending gossip mill that comes with fame, she isn’t cool with folks hating on her man.

“I’m very protective of him. I want people to see the man that I have grown to see. People who know him as a minister and a pastor who has been serving the youth for 20 years is who I want them to respect. You can talk about me all you want me but don’t come for Chad because I will act like I don’t have a publicist,” she says.

That attitude prompted Williams to respond to stories that ran shortly after their engagement announcement claiming Johnson is a Trump supporter who subscribed to the hatred our current POTUS constantly spews.

Johnson doesn’t seem too bothered by the rumors which he maintains are untrue.

“I think unfortunately people have been really good at creating their own reality and the statements made about me in that sense could not be further from the truth to the way I have lived all of my adult life,” he says. “People talk about having receipts and I think I’ve got plenty of them in the opposite direction.”

Some fans may have been puzzled when they saw Chad pop the question during the show’s premiere episode, but Michelle Williams set the record straight on how that footage made it into the series.

“I wish I could have recreated those tears but no ma’am. That was our personal footage. We had two sets of professional photographer as well as Chad’s friend from his ministry in Phoenix there,” she explains. “He captured the footage of when Chad was in my hometown in Rockford. Somehow, when they got the footage, they edited it to make it look like part of the production. We knew we had to show it.”

While watching this couple enjoy their romance while planing their future is fun and entertaining, the real gift of the series is watching them navigate through Williams’ struggles with depression, something we rarely get to see on-screen. Michelle Williams is keenly aware that she’s empowering people to take control of their mental health by sharing her story.

“I am so glad to have the opportunity to share my journey. I think that people like me are making it easier for someone to go get an assessment and therefore get a diagnosis and have a name to put to what they’re feeling,” she says. “ A lot of people have been walking around with depression or anxiety without knowing what it was.”

Johnson is also a beacon of hope for people who may not know what to do when a loved one is suffering and shines a light on the important role a partner can play in recovery.

“From my stance, a true display of love is being there in the good and the bad and being able to display those vows before we even walk down the aisle has been a privilege for me. When it comes to the mental health piece I have had to educate myself and ask a lot of questions to our therapist. I have had a lot of learning to do because I have never experienced it myself and I have never experienced it this close to me,” he says. “You will see my journey play out in the show because that’s a part of our reality. Me trying to find the balance and happy medium between being a fiancee and really wanting her to be at her best. I think there’s a good peak into how I learn to be that support system in the show.”

Together, the couple is also poking holes in the long-standing myth that faith should be all that is necessary to combat mental health issues.

“That’s definitely a lie that we want to confront because I think that is one of the things causing people to end up taking their own lives, ultimately. The more you think you can handle it yourself, the darker a cave you go into and that’s the most dangerous thing you can do. You should not think you can handle it alone or think there’s something wrong with getting help. We have got to remove the stigmas of thinking it’s wrong to need help,” says Johnson.

“Regardless of what state I am in, my faith will always be my foundation no matter what. Just because I receive therapy does not mean I don’t pray. We incorporate prayer into my therapy so for me it goes hand in hand,” adds Williams.

Chad Loves Michelle airs Saturdays at 9/8c on OWN.