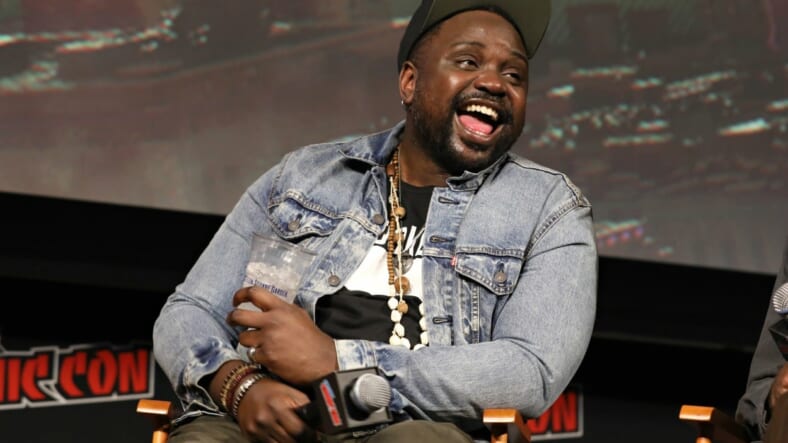 Brian Tyree Henry is most commonly known for his portrayal of Alfred “Paper Boi” Miles in FX’s hit tv series Atlanta alongside co-star Donald Glover. But the North Carolina-born star has a resume that shows an exceptional amount of range, and his commitment to representing the Black community in a way that they can be proud of, is unwavering.

Monday, in an interview with The Hollywood Reporter, the 36-year-old opened up about his process for picking roles and his return to the Broadway.

Henry has teamed up with Moonlight director Barry Jenkins, for a new drama If Beale Street Could Talk which premiered at the Toronto Film Festival in September. In the film his character, Daniel, talks to Stephan James‘ character, Fonny, about how it feels to be in prison. And he admits that watching that powerful scene afterwards was incredibly difficult.

“It was not easy to watch,” he says. “I kept my head tilted to hide the dripping of tears falling but also to make my vision askew, to see that world on a tilt because that’s how walking in this world as a person of color always feels to me — trying to walk vertically in a world that wants you to be obtuse.”

“I just wanted to come home,” he said of his return to Broadway stage for his new project Lobby Hero.”I literally cut my teeth [in New York] in theater. Theater is the most honest thing in the world because not everybody can do that. Once that curtain comes up, that’s it. You can’t restart, you can’t go back, and you have to live that life from beginning to end.”

Paper Boi, Paper boi all about that paper boy! https://t.co/VZNs6avn16

As for his popular role in ‘Atlanta,’ Henry is excited that the series has showed Black men dealing with their emotions in a deeper way the second season.

“I was like, “Can we talk about mental health please?” It’s OK for us to be sad, it’s OK for a 6-foot, 260-pound man to cry,” he says with assurance. “There’s nothing wrong with that. You better let that black man cry because at the end of the day, you’re constantly told what you can and cannot be in this world, and you have to know who’s on your team.”

In previous projects, White Boy Rick, Lobby Hero, Spider-Man: Into the Spider-Verse and also in the upcoming films The Woman in the Window and Child’s Play, Henry plays a law enforcement role. The significance of those characters in this current political climate isn’t lost on him.

“I remember the shooting of Philando Castile, and I just remember going f*cking ape-s**t crazy. I live in Harlem, and I remember being so enraged. I called my sisters like, “Quit your job right now. Not only are you a Black woman, but you’re a Black woman cop.” One of them was like, “I can’t. I really can’t. I can’t do that.” I took a step back, I was like, I can’t make her do that. Who am I mad at?”

“There’s a reason I’m playing these detectives,” her adds. “Because the one thing I like about these detectives is it is now putting me in this frame of mind of this person who chose this job, who wants to protect us. And believe it or not, most of the police that joined, it’s because they want to protect and serve.

“It just so happens that there are a lot of places where being a cop you have an agenda and you don’t really give a fuck about the communities that you patrol,” he continued. “But that’s not all cops. It’s enlightening. At the end of the day, the humanity of these people is what I’m trying to get to.”