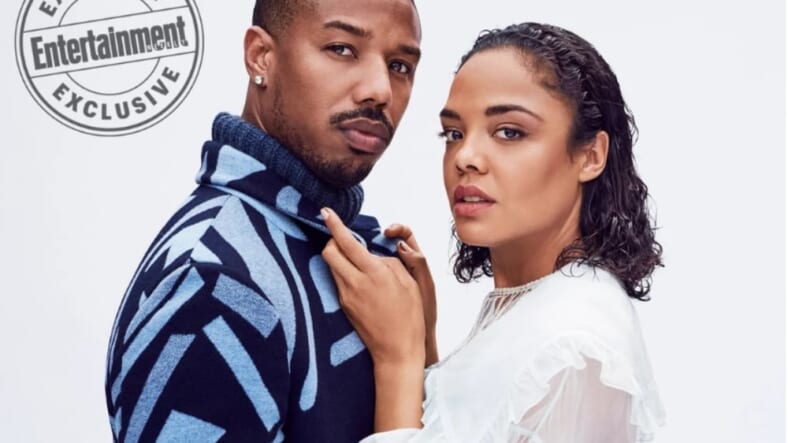 Michael B. Jordan and Tessa Thompson star on the cover of Entertainment Weekly. (EW.com)

The two stars reunited, reprising their roles as Adonis Creed and Bianca Taylor in the highly anticipated Creed II, the second installment of the reimagined Rocky franchise.

This time around Creed is going to fight the son of the infamous Drago who killed his father Apollo Creed in Rocky II. Jordan said the movie’s premise, “definitely got me amped up to play this part.”

Thompson on the other hand had to go and refresh her memory and rewatch the earlier Rocky movie to get a handle on her role.

“You know what, I did go back and watch was Rocky II, just to get a sense of what they did with [Rocky’s wife] Adrian in that film, and how those characters started their family and how their relationship transitioned from the first [film] to the second. I thought there was an opportunity to do something nice with ours in terms of an homage to that,” she told EW.

Thompson said she’s happy that her character had more depth in Creed II.

“Yes, I think for me, more important than the actual page space is just that it felt like the character was developing. What we were able to do in the first Creed was create a character that felt very singular, a woman that felt like she had her own agency, that felt like she had a rich enough inner life that she could occupy her own narrative entirely. We were trying not to be precious, but I wanted to continue that in this next part of the journey. We both have grown since we made the first film, and at a certain point you don’t want to be just a cog in something moving, you want to be instrumental to the organism of it. Mike is producing on this one. We’ve always had skin in the game, but we’re both hitting a point in our careers where we want to really…”

Jordan said it’s not coincidence that the widely popular movie resonates with Black audiences. It was deliberate.

“Yes. One thousand percent intentional. As broad as we want it to be and as accessible to everybody, we try to find moments to make it very specific for us. We deserve that. You know, what black love would be like, what are the things that we would be doing? Like, if she needed help taking out her hair, that’s what I would do. That’s what I did for my sister, my mother, what I would do for my girlfriend, wife. We tried to do it as much as we could.

Thompson adds: “For me, it felt very powerful in the first Creed to go on those steps in Philly and to be promoting this movie that, in my estimation, is black as hell. And the folks that were engaging were all sorts of people. To me, that does a tremendous amount to humanize our experience.”