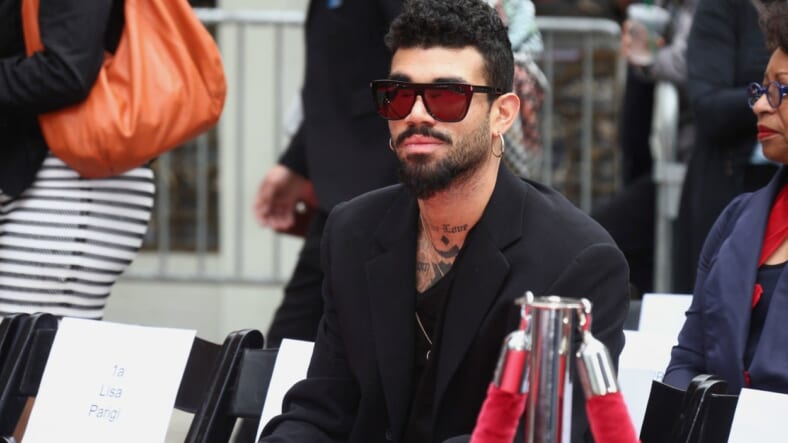 This weekend Black Twitter collectively let out a gasp of surprise when they realized that music legend Lionel Richie, has an über attractive son that somehow managed to go under the radar — until now.

Wednesday, a user with the handle @BeeBabs posted two pictures of Miles Brockman Richie, along with the caption, “I was today years old when I discovered that this is what Lionel Richie’s son looks like.”

When people think of the famed Commodores singer’s family, daughter Nicole Richie is the first person who comes to mind, followed by Sophia, who has recently gained notoriety after she started dating ‘Keeping Up With The Kardashians’ star Scott Disick, following his split from longtime girlfriend Kourtney Kardashian.

But aside from his two girls, it turns out the 69-year-old also had a son with ex Diane Alexander, whose name is synonymous with scandal for older music fans.

I was today years old when I discovered that this is what Lionel Richie's son looks like pic.twitter.com/27cN5XdDoq

In the 1980’s, the love triangle between Lionel Richie, his then wife Brenda Harvey-Richie and dancer Diane Alexander was dissected all over the tabloids; especially after Richie’s wife was arrested for laying hands on everybody one night!

Richie and Alexander reportedly met at the 1984 Olympics, where her had performed “All Night Long” at the closing ceremonies. They allegedly carried on an affair for years, a rumor that seemed to be substantiated after Alexander appeared in the singer’s music video for “Dancing On The Ceiling,” in 1986.

Two years later, Brenda caught wind of her husband’s infidelity, showed up to Alexander’s apartment at 2 a.m., and caught him red handed. Ritchie ran out of the apartment after his wife allegedly kicked him in the groin, and when she started beating on his mistress neighbors called police after they heard “a woman screaming.”

Officials later confirmed they walked in on an assault in progress.

“Our officers arrived in less than a minute, observed suspect Brenda Richie striking and kicking the victim on the floor of the apartment,” Beverly Hills police Lt. Robert Curtis said. “A second victim, entertainer Lionel Richie, later phoned and stated to officers he had been kicked in the stomach area by Mrs. Richie (at the apartment).”

Which brings us back to the present, with the tweet revealing Miles Richie’s existence (to a whole new generation) going viral with over 30,000 likes and retweets.

Like his baby sister Sophia, Miles is also a model, who has apparently been sitting front row at fashion shows with the cool kids all along under our noses.

“I never expected this on my general celebrity stalking morning instagram jog. Shook,” @BeeBabs explained in a follow up tweet, as others agreed they were shook as well.

The 24-year-old has yet to respond to becoming the internet’s latest #ManCrushMonday, but his Instagram page has definitely been receiving a lot of new followers over the weekend.

It’s time to chop the beard I think… ? @alansilfen

Amazing to watch this man grow day by day…. your birthday in two days is going to be a great landmark in what u have worked for. Once again happy Father’s Day and almost birthday… PS the old mans double shade chain hang gang is absurd lol