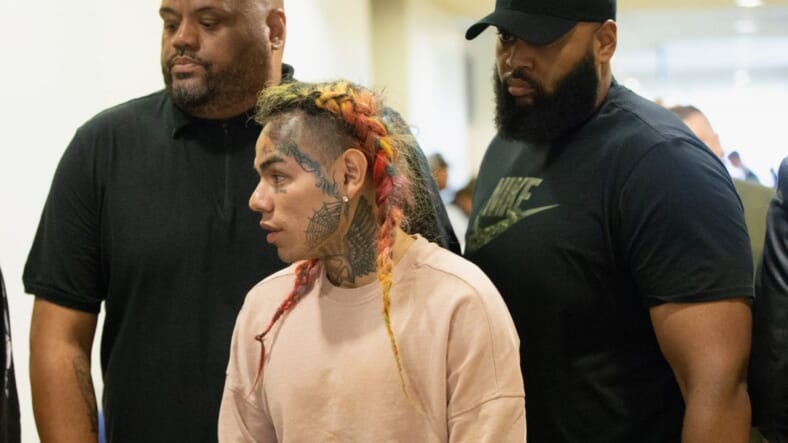 Rapper Tekashi 6ix9ine is sitting in the slammer awaiting a 2019 trial for racketeering and firearms charges. However, someone might want to tell his ambitious fans who are conspiring to bust him out of jail, based on a Facebook event that he’s safer behind bars.

TMZ recently reported that just before he got arrested, the Feds wiretapped several former members of Tekashi’s crew and found that they were conspiring to have him killed after his “The Breakfast Club” appearance.

The evidence is damming, TMZ reports.

While jail may be a safe haven for the rapper right now, he’s still got a group of super fans publicly planning his escape.

The Facebook page event hosted is called, “break 6X9ine out of jail” by “The random urge to scream Tr3yway” has so far drawn 6,000 plus attendees for the December 12 event, listed as a “religion”-centered one.

After being arrested on racketeering and firearms charges, it was announced on Monday, that rapper Tekashi 6ix9ine‘s federal trial will begin Sept. 4, 2019, according to Complex.

His attorney, Lance Lazzaro, is planning to apply directly to the trial judge, TMZ reports. The 22-year-old rapper, whose real name is Daniel Hernandez, and five others were indicted Nov. 19 by a federal grand jury on racketeering and firearms charges. He pled not guilty.

Lazzaro, TMZ writes, has argued that Hernandez is not a criminal but “an entertainer who portrays a ‘gangster image’ to promote his music.”

What’s not entertaining are the numerous incidents mentioned in the indictment including an alleged armed robbery on April 3 and a July 16 incident in which an innocent woman was shot in the foot.

“This criminal enterprise has no business in our city, and we will continue to work with our partners to ensure that Nine Trey crew members, including the more well-known Tekashi 6ix9ine, are in a place where they cannot inflict further violence on our communities,” Homeland Security Investigations Special Agent in Charge Angel M. Melendez previously said in a press release first announcing the rapper’s arrest.

The racketeering and gun charges come on the heels of his conviction last month for sexual misconduct with a 13-year-old girl. He was sentenced to just four years of probation in that case.