‘Hate it or Love it!’: B Smith’s husband quotes 50 Cent while posting pictures of his alleged new girlfriend

While Dan Gasby cares for his Alzheimer's-afflicted wife, B. Smith, he apparently doesn't seem to mind being public about having another relationship at the same time 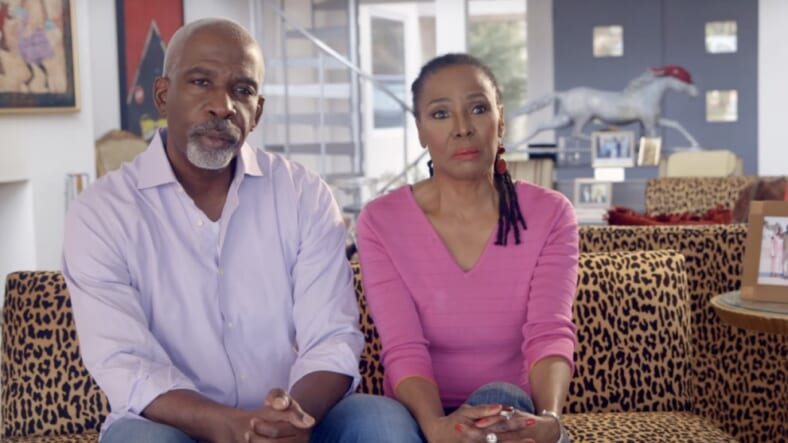 Former restauranteur, model, and lifestyle expert B. Smith has been struggling with early-onset Alzheimer’s since her diagnosis in 2013, but now fans are shocked to find out that her devoted husband has allegedly been showing off his new girlfriend, despite the couple still living together.

Tuesday, in a Facebook post that immediately raised some eyebrows, Dan Gasby posted a picture of him cozied up next to a smiling blonde woman, with the caption, “To steal the title from 50 Cent & The Game… ‘Hate it or Love it!’ You can debate, but for me I’m just feelin’ great!  Life’s to short to ask for a rebate so I’m gonna surf? thru life before it’s toooo late!!!#whylie”

While many of Gasby’s friends seemed supportive of the post, fans of the couple were less enthusiastic and had plenty of questions.

B. Smith’s name has always been synonymous with Black glamour and in 1992 she got married for the second time to her current husband and business partner Clarence “Dan” Gasby.

At the time Gasby was the executive producer of the Essence Awards and the senior vice president of marketing at Camelot Entertainment Sales Inc., but as Smith’s business ventures took off, with many calling her, “The Black Martha Stewart.” Gasby also became her business partner.

Over the past 26 years, the couple has often been seen as a beacon of Black love, and when Alzheimer’s began to rob Smith of the lifestyle she’d become accustomed to, Gasby was by her side as they created a platform to speak to others in the community about the disease that plagues an estimated 5 million Americans.

READ MORE: Will Smith recounts the 45 days Jada cried over their marriage ‘I was failing miserably’

“The brain is the most important thing in the body, the least understood and the most taken for granted,” Gasby explained during a 2017 event highlighting the Wake Forest Baptist Medical Center’s new Alzheimer’s Center. “You can replace corneas, you can modify arteries, but the thing above your eyebrows you can’t change.”

When Smith wandered away from home and went missing in New York City for a day before someone recognized her and returned her home, Gasby was again portrayed as the devoted husband and caregiver, stating to the press, “It’s tough. She’s the greatest thing that ever happened to me and it’s tough watching this transition.”

So how did the couple go from “in sickness and in health” to B Smith’s husband happily posting pictures with his alleged new girlfriend, who he refers to as “Alex”?

Well according to an anecdote that Gasby shared last week, he’s alleging that the three of them have an arrangement, a claim that some find dubious given Smith’s condition and that her memory is likely severely compromised.

“Last night I had a really great time,” Gasby begins. “We ( B,Alex and I) had dinner with friends. And one person who knows who we are couldn’t figure us out!
So like most a**hole’s they stare and after a few drinks start asking questions. So he said, “I know B’s your wife who is the other person (That being Alex)” And I said my life partner! Now it gets good! “How’s that work?” He said!”

Gasby then goes on to describe the way he explained their delicate living situation to a complete stranger at a party.

“I replied I take care of my wife and love her! “And what about Alex!” And I said,”I’m in love with Alex”. “Whoa!!!” He said!!! “How’s that work?” Well I’ve been with B 27 years! Love her and will to her or my dying breath take care of her! But I realized you can’t love the past you gotta maximize the now!”

When the man asked Gasby, “Is it complicated?”, he responded, “I said no it’s really very simple you can love people for different reasons.”

When asked if he had any guilt about how he was carrying on with his new girlfriend while his sick wife was right there, 64-year-old responded, ”F**k guilt f**k religion and f**k people who have a problem with my honest management of my life. I’m now healthy happy on one side of the coin of my life and deal openly and honestly with the other side!”

Last night I had a really great time. So good I went to sleep and woke up thinking about the interaction I had with this one person. We ( B,Alex and I) had dinner with friends. And one person who knows who we are… https://t.co/uuIS8hRzCq

Gatsby’s girlfriend Alex has now been identified as Alexandra I. Lerner, and he first posted pictures of her over the summer. The pictures, however, were usually of Lerner and Smith, so many assumed she was Smith’s caretaker. We are all just now just finding out that Lerner and Gasby are romantically involved.

While Gasby seems to only allow supportive messages to remain on his personal page, longtime fans and supporters elsewhere are grappling to make sense of the revelations.

Let me go run on LSA for the B Smith tea. What a tragic situation. Her trash ass husband spending her money on that ww he’s with & flaunting her around. Does B or they have kids? I don’t understand how he can be so bold and no one trying to kick his ass….