OPINION: Andrew Johnson, 17, had to make the choice to cut his dreadlocks in order to participate in a wrestling match, but there's no way it should have gotten to that point 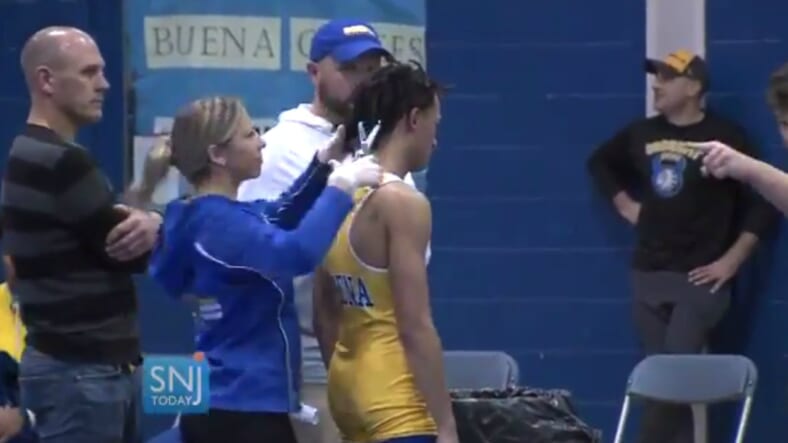 At first glance, the video shocked and immobilized me.  Momentarily, I lost the ability to absorb any information beyond the image of a white woman roughly cutting the dreadlocks from the head of a young, black wrestler.  In the frame I was stuck on and outraged by, I only saw white people around him. What were they doing to him? Then, in the background, two young men of color sitting on a bench looking angry, but helpless. I have seen that look before, too many times.

OPINION: NJ referee, who forced Black high school wrestler to cut his dreads, has absolutely no business near children

I started the video over again and I saw a white male, maybe a fellow wrestler in his face, pumping him up for the match to come as Delilah cut Samson’s hair.  Another white wrestler came into frame and did the same. The video continued as the young, shaven, emotionally wounded wrestler took to the mat and won his match.  He was reluctant to go near the referee, but he eventually did and quickly allowed his hand to be raised in victory. But you could see in his demeanor that he had been through something very, very wrong.

Something his mother would later characterize as, “…brutal, emotionally and physically.”

When I was able to gather myself, it became clear that the referee was the agreed upon villain here.  A man who had already been punished for using the N-word against another black wrestler, declared that the youngster’s dreads were against the rules of the governing organization.  Yet, he had been allowed to wrestle up until that point all season. The referee wouldn’t budge and so the young man relented and allowed his hair to be cut.

Andrew Johnson, 17, is an African-American student and wrestler at the Buena Regional High School in New Jersey.  And while the overtly racist referee is an easy target as the culprit, every adult in that gym who was associated with that team was at fault for what happened to Andrew.

Sports journalist, Mike Frankel of SNJ Today News, brought the video to many via Twitter. Below the video he proclaimed Andrew to be the “epitome of a team player.” How can a human being be so blind?  But maybe Mike is all about the win. No matter what it does to this young man’s soul.

Andrew is a student in high school, not an Olympic athlete. At his school, he is to be educated and protected.  But they failed him. Dramatically. What he learned is that winning is everything.  That his dignity, especially as a black male, and moral compass must take second place. That his body must take second place.  Some adult in that room should have had the courage to step forward and say no. Some adult should have wondered aloud, “What’s the lesson we want to leave here with today?”

It should have been that there are some things more important than winning. This was an assault upon Andrew as a black man. Clear as day. The woman should have refused to cut his hair even if he said he wanted it.  He’s a kid. She should have told him that his dignity was worth more than a sweaty wrestling match. Instead of urging him to cut his hair and pumping him up for the match, the other wrestlers should have rallied around him and refused to participate unless Andrew was allowed to keep his hair and participate.

In 1946, the Penn State football team had two black players.  They were scheduled to play the University of Miami which refused to compete against black athletes.  They told Penn State that their black players would have to be left behind. The Penn State team had other ideas.  They stood up and canceled the game in support of their black teammates. That’s the lesson that Andrew’s coaches and teammates should have taught him that day.

Instead, they failed him in the most spectacular way and a team apology is the very least they can do.

Jeffrey Blount is a novelist, Shapiro Fellow and Journalist in Residence at The George Washington School of Media and Public Affairs.  Blount has also directed Meet The Press, Nightly News and other programs during his career at NBC News.