OPINION: NJ referee, who forced Black high school wrestler to cut his dreads, has absolutely no business near children 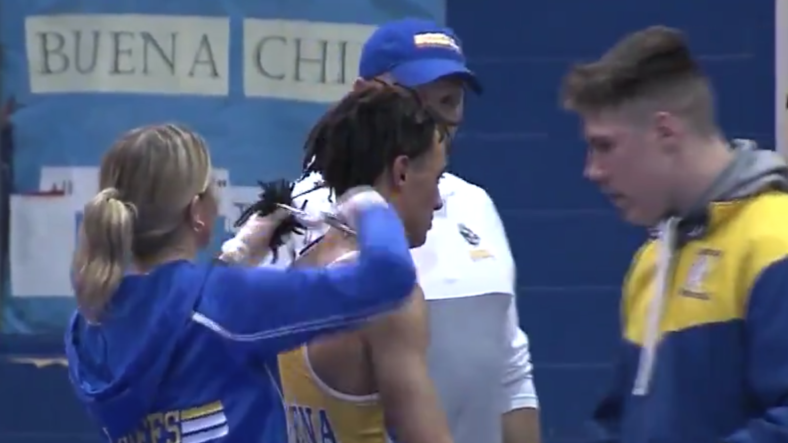 Andrew Johnson was given a choice to either cover over his dreadlocks or forfeit his chance to win the tournament; a choice no young man should have to make. (Screengrab)

It’s one of the most painful, viral sports videos you’ll watch — at least this week. A New Jersey high school student, Andrew Johnson, stands silently while a white woman clumsily butchers patches of hair from his scalp using scissors never intended for such a task.

Johnson, who is Black, is wearing the gold singlet of his Buena High School Chiefs, the wrestling team for which he sweat and trained his sinewy, 120-pound frame to battle.

High school wrestlers are tough kids because the sport is literally hand-to-hand combat. It’s you, another kid your size, some headgear and a mat. If you can subdue the other guy or girl, your hand gets raised.

My oldest son—a kid who played both football and rugby—bled from his knees and mouth at his first wrestling practice, and told me, “Dad, it’s aiight,” when I asked if he wanted to quit. But here, Johnson’s toughness and dignity are under attack and he’s visibly upset. His dreadlocks, which violate no rule in the sport, were cut off against his will because a referee decided on the spot that either the dreads go or Johnson would forfeit the match that could cost his team eligibility for a championship down the line.

Epitome of a team player ⬇️

A referee wouldn’t allow Andrew Johnson of Buena @brhschiefs to wrestle with a cover over his dreadlocks. It was either an impromptu haircut, or a forfeit. Johnson chose the haircut, then won by sudden victory in OT to help spark Buena to a win. pic.twitter.com/f6JidKNKoI

That official was later identified as Alan Maloney, who in 2016 had the distinction of getting body slammed by another Black wrestling official for using the N-word in an argument over homemade wine. Back then, Maloney got off with a wrist slap of sensitivity training and was then allowed to continue refereeing.

Neither he or the New Jersey State Interscholastic Athletic Association are answering questions about the latest incident, but it’s clear now that allowing him to continue was a mistake. A man who insists on the physical degradation of a student in order to compete has no business near children.

Johnson’s assault—and make no mistake, that’s what happened here—wasn’t even the most disturbing part of the video. As Johnson stands alone, having pieces of his body sheared away, various coaches approach and give him daps instead of intervening to stop the madness. Two of his teammates look on in disgust, shaking their heads but powerless to stop what’s happening.

Johnson went on to win his match by pinfall in overtime. He left the mat with blood on his face and tears in his eyes, but he showed more dignity than any adult in the room. He was already above the louse who chose to abuse what’s likely his only position of authority in life. He was above the school staffer who capitulated to carry out an unlawful and dehumanizing assault on a child. And, he proved to be bigger than his coaches who thought, somehow, that high-fives and encouraging words were all the solidarity he needed, when what they should have done was draw a bright, immovable line. 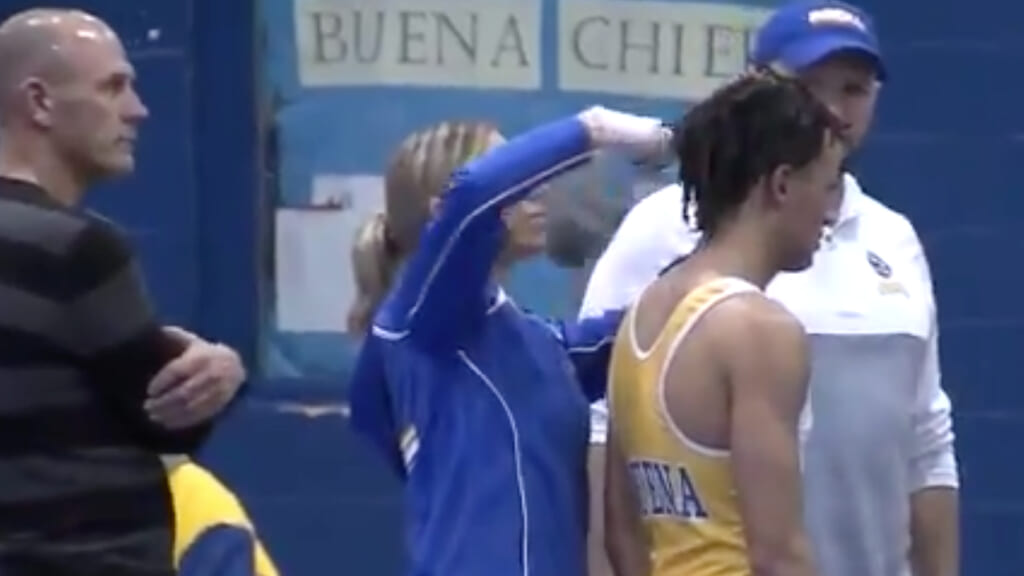 On the other side of that line would have been something bigger than dreadlocks or a wrestling trophy. It would have been a clear message to Johnson, and everyone present, that Black men do not have to accept dehumanization to qualify for endeavors our intellect, athleticism and discipline already meet.

Johnson will unfortunately be told the opposite throughout his life; that almost no petition to legitimacy justifies his presence when white doubts are raised. That message might mean having his credentials for employment questioned or, like a friend of mine in New York this week, having a random white guy insist he didn’t belong in his own apartment building. Nonetheless, Johnson should know it will come, and it will come frequently. It just didn’t have to be this week, when he’s still a kid, doing something he clearly loves and has worked so hard to attain.

This young man had every right to finish that tournament with every piece of his body that he brought in with him. Maloney, the referee who demanded he cut his hair, must never work again as an official on any level. Anything short of a ban would be a criminal failure to protect other children from someone who has shown repeatedly that he cannot be trusted with the welfare of Black children—if any children at all.

Keith Reed is a writer and commentator whose work has appeared in Espn the Magazine, the Boston Globe, Essence, Ebony and elsewhere. Follow him on Twitterand IG @K_dot_RE.