Despite rumors about the rapper holding out for enough money to perform with Maroon 5 at the Atlanta event in February, her representatives say it's not true 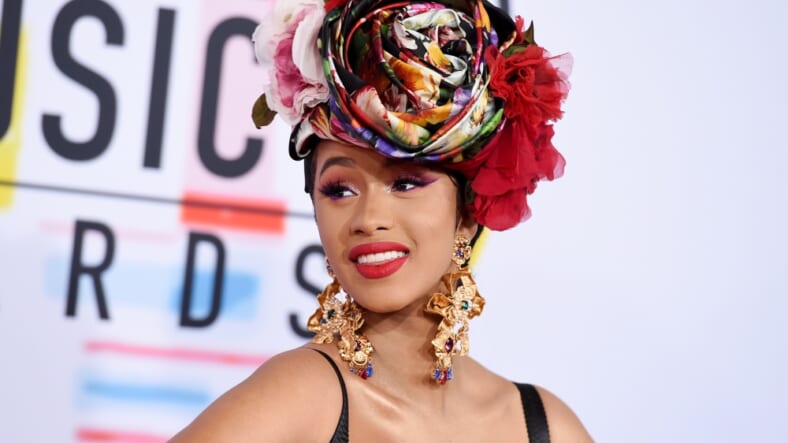 Cardi B arrives at the American Music Awards on Tuesday, Oct. 9, 2018, at the Microsoft Theater in Los Angeles. (Photo by Jordan Strauss/Invision/AP)

For some reasons, the rumors that Cardi B is entertaining the idea to play at Super Bowl LIII keep swirling.

READ MORE: Will Travis Scott take a knee during his Superbowl halftime show with Maroon 5?

Maroon 5 secured the deal and just recently rapper Travis Scott signed on as a headliner. Following Maroon 5’s No. 1 hit collaboration with Cardi B on “Girls Like You,” rumors surfaced that the rapper might join the band on stage, but a source insists that isn’t happening.

The Grio had previously reported that Cardi B was a no-go, but once again rumors are rising that the “Bodak Yellow” femcee is asking for a $1 million bag to perform at the show, something her reps reportedly deny.

“The rumor circulating that she wants [$1 million] and she wants her own set is false. There was never a firm offer to begin with for a performance. There [were] talks about it, but she was not particularly interested in participating because of how she feels about Colin Kaepernick and the whole movement,” the rep told Page Six.

“But again, there was never a solid offer for her to say yes or no to regarding the Super Bowl. She is already confirmed to do a set with Bruno Mars that weekend.”

Yes, Cardi B will be in Atlanta performing with Bruno Mars at a pre-Super Bowl concert, but that’s about it.

As reported by TheGrio in October, Bajan superstar Rihanna reportedly declined an opportunity to perform at the Super Bowl halftime show in solidarity with Kaepernick. Jay-Z also turned down an offer to perform last year. Cardi also said on camera that she wouldn’t do the halftime show in support of Kaepernick as well.