Having served in an all-black combat unit during World War II, he was honored multiple times for his service inside and outside of the military 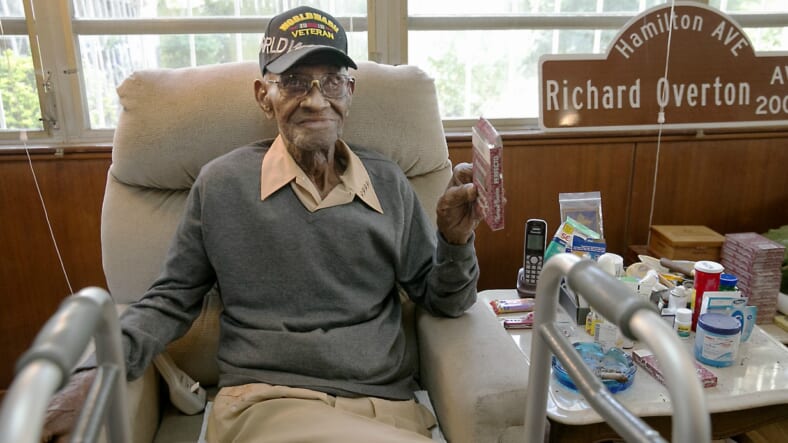 In this May 10, 2018 photo Richard Overton, the oldest living U.S. Veteran at the age of 111, is back in the east Austin home he has owned since 1948 after a renovation provided by Meals on Wheels of Central Texas and the Home Depot Foundation. (Ralph Barrera/Austin American-Statesman via AP, file)

World War II vet and Austin, Tex., resident Richard Overton, died on Thursday, leaving behind a legacy as a centenarian who was America’s oldest man and oldest veteran of World War II at 112 years old, The Austin Statesman reports.

READ MORE: Forest Whitaker calls it quits and files for divorce from wife of 22 years

Overton succumbed to complications from pneumonia at St. David’s Medical Center, his cousin Volma Overton Jr. said. The Greatest Generation hero fought the good fight on and off the battlefield and was hospitalized for more than a week before he was admitted to a rehab facility and passed.

Overton was a celebrity of sorts in his Austin, Tex., neighborhood. Neighbors visited his home to pay their respects with flowers in hand to honor the man who loved to chat and the company of people who he had come to love the 72 years he lived in his neighborhood.

“He considers himself our neighborhood watchdog, and he knows everything that’s going on,” neighbor Helen Elliott told the Statesman in 2016. “I don’t think the neighborhood would be what it is without him. He’s our legend, our icon.”

With his signature cigar in his hand and a bottle of whiskey at his side, Overton invited all who would come to his home to celebrate his recent birthdays. Still on his front door, hung a sign from his 112th birthday celebration that said: Making Friends since 1906.”

Volma Overton reported that during his previous 111th birthday, the local celeb centenarian had folks lining up to take pictures with him and shower him with gifts.

READ MORE: ‘Overjoyed’ Jemele Hill ends rollercoaster year with a ring on it

“It looks like everybody’s getting ready to take a picture with Santa Claus — and he never turns anyone down,” Volma Overton said. “He’s an open person to everybody, and he wanted everyone who was in town who wanted to come by to come by.”

Overton enlisted in the military in 1942, nine months after the Pearl Harbor attack. He was stationed with the 188th Aviation Engineer Battalion, an all-black unit. His time in the U.S. Army was spent serving in the Pacific theater including Guam, Okinawa and Iwo Jima. In 2013, Overton recalled his time in the military to a reporter saying that he “landed on more beaches under fire than he could remember.”

Still with a sharp mind, he remembered ducking in foxholes and dodging bullets and helping his fellow soldier by moving bodies from the battlefield. Overton ultimately left the service in 1945 at the war’s end.

After his time in the military, Overton worked in furniture stores. He also did a stint in the state treasurer’s office.

In 2013, Overton was invited to the White House on Veterans Day by then-President Barack Obama. He was honored with a ceremony at Arlington National Cemetery.

The Austin City Council also honored him with a proclamation that same year designating his birthday as “Richard A. Overton Day.”

The distinction didn’t end there. Hamilton Avenue — the street on which Overton lived — was bestowed the honorary name Richard Overton Avenue, after Council members passed a resolution.