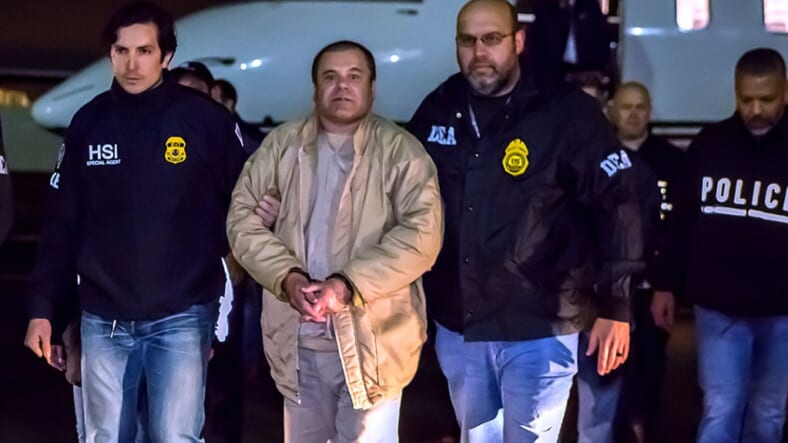 Joaquin “El Chapo” Guzman‘s wife is laughing out loud at the cold dish of karma being served up against her husband at his criminal trial.

Emma Coronel Aispuro posted three pictures of herself on social media laughing and looking like life’s a breeze after leaving Brooklyn federal court a day before where she endured listening to El Chapo’s mistress testify against him, the NY Post reports.

We guess El Chapo had to learn the hard way that these hoes ain’t loyal after his former mistress Lucero Guadalupe Sanchez Lopez cried on the stand, spilling all the tea and testifying against him about their years long love affair.

Lopez was likely sobbing so hard because the 29-year-old learned her life was on the line after newly released text messages revealed that El Chapo made threats against her life and the two may even have a child together.

“Look, the mafia kills people who don’t pay or people who snitch,” Chapo wrote in one 2012 message to Lopez that was released in his Brooklyn federal court trial Thursday according to the NY Post, “but not if you’re serious, love.”

Lopez worked in El Chapo’s drug empire and had an affair that lasted for years. He warned her to keep a low profile because people were talking about her.

“Lies are what cause problems. Don’t lie and people will always see the good, love. Always remember that. I’m telling you this because I love you,” he continued.

While testifying Thursday, Lopez talked about how much she loved the drug lord but admitted she was “feeling threatened” and was worried “he could actually hurt me.”

Going to see El Chapo, she said, involved her closing her eyes and his security would cover her eyes and take her cellphone.

On the stand, Lopez also recalled the moment when she was with El Chapo when his secretary told him that an associate Tio Virgo was dead. Lopez believed that it was a hit on Virgo, ordered by Chapo.

“He turned around and looked at me in a slow demeanor and then he said something I did not like,” she told jurors.

“He said from that point on, whoever betrayed him, they would die. Whether they were family or women, they were going to die.”

This side chick surely is not moving in silence.