Honoring Dr. King: Dr. Bernice A. King keeps the dream alive and has a hopeful message for Trump’s America 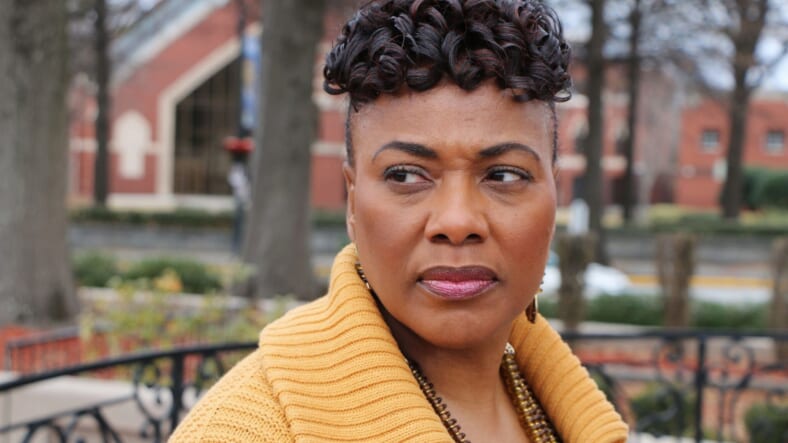 In this Jan 10, 2018 photo, Bernice King poses for a photograph at the King Center, in Atlanta. The assassination of Martin Luther King sparked riots and eventually led many Americans to revere the civil rights icon that some reviled during his lifetime. For his three surviving children, the past five decades have meant coming to terms with their father’s death and legacy. (AP Photo/Robert Ray)

Had he lived, Dr. Martin Luther King, Jr would have turned 90 on January 15. But, on April 4, 1968, an assassin’s bullet cut the iconic civil and human rights leader’s life short at just age 39. Since 1986, however, the United States has officially observed Dr. King’s birthday as a federal holiday every third Monday of January. In Atlanta, this time of year is especially heightened at the King Center, founded by King’s widow, Coretta Scott King.

Run by Dr. Bernice A. King, the youngest daughter of Martin and Coretta King, since 2012, the King Center shifts into high gear this time of year, celebrating the annual salute for multiple days. This year’s activities began January 11 and will culminate on the official holiday on January 21.

The rest of the year the King Center sets its focus on its core mission of continuing the work of Dr. and Mrs. King. In the midst of the government shutdown, which closed visits to the King Birth Home and historic family church, Ebenezer Baptist, King spoke exclusively to TheGrio about her mother’s role in securing her father’s legacy, the King Center honoring John McCain, a man who once opposed the holiday celebrating her father, with an award, the sale of the King Birth Home to government and how we must operate under Donald Trump.

My father would not be the person that he is and [have] his iconic stature had it not been for the work that she did so I speak certain things intentionally. I have incorporated in our commemorative service [the official service held on the King Holiday] a special tribute to her so that people are reminded that this holiday that we are celebrating really would not have happened had she not been diligent and determined. She had a strategy around it. While Congressman Conyers was introducing legislation that continued to fail in the House, she was building up a groundswell of support in different cities and states across the nation, sending out letters to different municipalities and encouraging them to celebrate the King Holiday every year. So by the time the holiday actually passed as a federal holiday, many cities were already commemorating his birthday every year because of the efforts she made encouraging people to do that and even traveling to some places and then the traveling she did around the world. Most people don’t know that more than a 100 nations celebrate a holiday of a leader that is not a citizen of their nation… Before her death, she was never on a banner. She is on them [now] because we want people to know it was a partnership.

A message that brought a nation together after the assassination

American civil rights campaigner, and widow of Dr. Martin Luther King Jr., Coretta Scott King (1927 – 2006) addresses the assembled crowd during the ‘Poor People’s March,’ Washington, DC, 1968. The March to spotlight the needs of the impoverished began in Mississippi on April 22d and arrived in Washington on May 14th. The participants camped downtown and demonstrated every day until June 24th. (Photo by Hulton Archive/Getty Images)

Two and a half months after Daddy was assassinated, she decided not to just be a grieving widow, but to turn that grief into something that was necessary at the time because the nation was literally in flames. There were many riots going on across the nation when Daddy was assassinated. So her message was very key then as the one who suffered first. Yes it was a loss for the nation, but it was her personal loss, our loss as children, and for her to take the posture that she did and to encourage people to continue in Daddy’s spirit of nonviolence and loving your enemies and let us continue his work [was significant].

The King Center decision to posthumously honor John McCain, who had publicly opposed the King Holiday, with the Trumpet of Conscience Award at its annual Salute to Greatness Gala

My Daddy didn’t believe in closing people out forever. That’s just not his spirit, just not his heart. He was always into reconciliation, redemption. So McCain apologized for that. He recognized that he was on the wrong side of history. We don’t award people based off of this policy or that policy per se. We look at them in total. If you look at any of our honorees, you would say ‘uh they had an issue here and maybe we should not honor them because of that.’ [We are honoring him] because McCain evolved. He acknowledged that and, more importantly, what he did in the last year of his life, the posture, the tone he set for the Senate. He talked about moving beyond the partisanship that was destroying the fabric of our nation. When he was [dying], he was that decisive vote in saving the Affordable Care Act that Obama diligently worked on to ensure that more people had access to healthcare. I thought that was tremendous. He worked with Senator Kennedy before he passed on immigration reform, pathway. So there are so many different things that he did support that he is worthy of that honor. It’s a special award. It’s not a signature award.

We have to preserve voting. We have to protect it. We got to fight in every generation to ensure that. I think when we achieve certain victories, we get comfortable. I always like to say to people remember my mother’s words, etch them in your mind, your memory so that you can recite them over and over again: “Struggle is a never-ending process. Freedom is never really won. You earn it and win it in every generation.” As much as it would be wonderful to lay back and just live, as we say, off the fat of the land, we’re called to a freedom struggle. Every generation. A few individuals may want to opt out but the generation is not exempt. We can’t let down. We can’t relax. We can’t just get self-consumed. We have to always realize that we have a responsibility to future generations to preserve the freedoms that were advanced for us and even advance further freedoms. The dream lives, the legacy continues and the struggle is very much real.

Selling the King Birth Home to the National Park Service

At the end of the day, we are in the business of educating and training people in my father’s philosophy and methodology. We are not preservationists. So when you’re talking about preserving something for history and for hundreds and thousands of people to visit, it’s a lot of investment. That’s not our business. We need to stay in our lane. While it’s unfortunate that the government is shutdown, they are better at that kind of preservation. When it comes to this campus, [the King Center], it would be a grave error if we ever decided to sell this campus that the final remains of Dr. King rest upon. I won’t say over my dead body but I will continue to hold that position very strong and use my voice and the influence that I have as a member of the board, as a citizen of the nation and as the daughter of my mother and father, to ensure that does not happen. This campus must remain in the auspices of the King family.

Never giving up in Trump’s America

We should not adopt the mentality that those people are our enemies. That’s the worst mentality we can adopt. We need to be in the business of seeking to impact and influence as many people as we can who may not even think like us, live like us, believe like us… How many people reach out to Trump supporters? How many people have dared to sit down and have a conversation and a meeting of the minds with someone who has supported President Trump? We don’t like to do that. We like to just be on our own bandwagon and speak ‘this is right’ and ‘you are wrong.’ And that’s just not the approach of Kingian Nonviolence [a philosophy and methodology that provides the knowledge, skills, and motivation necessary for people to pursue peaceful strategies for solving personal and community problems] and Nonviolence 365.

Transformation and change happens in people’s mindsets. If we don’t change their mindset, they’ll continue to put people in place who help to perpetuate the system. The system is not going to change until we get some people who have a different way of thinking and that’s a lot of hard work and discipline… We got to be in the position of rehabilitating and redeeming people and winning people over because, otherwise, all we’re doing is further polarizing [them]. I would hope that people who are in the social justice community are not just trying to fight to be a fighter. If your goal is just to be a fighter, then you’ve lost because you’re going to be in that position for the rest of your life.

The long and short of it is: during these tumultuous and difficult times under his leadership, we have to make sure that we are doing our part on the grassroots level of continuing to make sure that our voices are heard, our message is clear, that we have a strategy as to how to win people over to what we believe is the right thing and it’s hard work. Everyone is not going to be won over but you never know who will be.

For more information on the King Center, visit thekingcenter.org.