‘We’ll never let cupcakes get between our friendship’: NFL All-Pro Michael Griffin talks about the impact of that viral cupcake ad 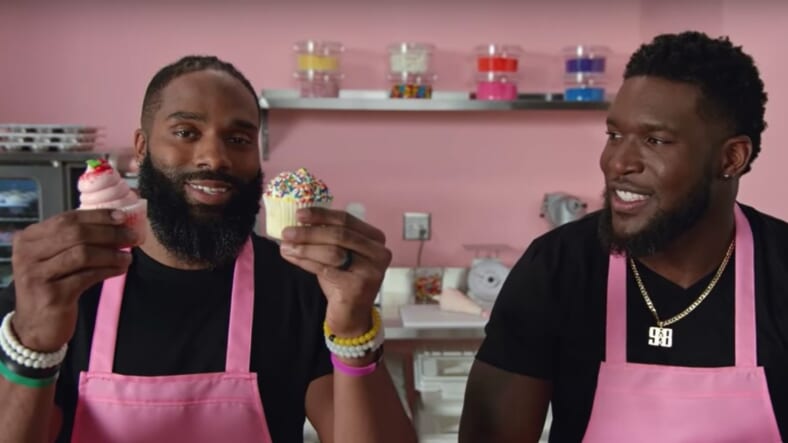 For Michael Griffin, it all started during a lunch conversation two years ago shortly after he played his final NFL game.

“We thought about it and said, ‘what is something that, no matter what the economy is, that everybody could use,” the former NFL All-Pro said. “And we understand that there are so many different holidays but the one thing that everyone has is a birthday and everyone needs a cake for their birthday.”

Longtime friends and college teammates Griffin and fellow All-Pro Brian Orakpo, along with their friend Bryan Hynson, were figuring out a game plan of what to do at the end of their respective football careers when they stopped at a Gigi’s Cupcake Shop.

“We always go hang out during the offseason,” Griffin told theGrio. “We were very familiar with Gigi’s because Brian and I played in Nashville where the company originated, so Brian came up with the idea of why don’t we open up a cupcake shop here in Austin?”

“We started doing our research, met with the right people and got it done,” he added. Griffin played 10 seasons in the NFL, nine of them with the Tennessee Titans.

Griffin, an Austin native, was a standout defensive back at Texas, including being a member of the Longhorns’ 2005 National Championship team. Drafted 19th overall in the 2007 NFL Draft, Griffin had a vision of what he would do when his playing days were over.

“When I first got drafted back in 2007, the economy was down,” he said. “So, I bought a lot of rental properties for cheap. Those are things that I did so that when the economy comes back, I’ll be able to rent them out and possibly make money down the road.

“I was always looking at different directions and different things because I didn’t want to just be done and wonder what do I do now at such a young age,” he continued. “When I was done playing, I was 33 years old and it’s something that allowed me to keep on going and keep doing something. This has kept me organized and helped me stay motivated and try to figure this entrepreneur world out. You know how to defend the run and how to defend the pass, but you don’t know what’s outside of football.”

Griffin, who currently serves as an analyst on ESPN’s Longhorn Network, said that he – like so many other college athletes – was laser focused on football but wishes that he had focused even more on life after the game.

“A lot of time, you’re putting all of your eggs in one basket,” he said. “I was blessed to have played for so long, but I wish I would’ve known and wish a lot of kids would take college more seriously.”

Orakpo recently announced his retirement from the league after 10 seasons and three Pro Bowl appearances. Both men are now going all in on their business venture, even though Orakpo is also taking time to spend with his three kids.

“I don’t want it to be the perception where I’m [retiring] because I want to be a full-time baker,” Orakpo said on Jan. 2 while announcing his retirement, adding that he was getting out of the game while he was still healthy.

“It’s just been blowing up because people love me and Griff’s story,” he said, “so it’s just taken a life of its own.

Their popular Microsoft ad has caused business to pick up at their lone location in Austin, and there have been days where he has had to get back in the kitchen to get things moving. Griffin says that this is because this is not simply a vanity project.

“We know all the ins and outs,” he said. “After this commercial, we’re getting more and more business and I had to come in. It’s a team effort.

“There was a time when we had to go our separate ways with a manager and I was acting manager/baker for about five or six weeks, and I was coming in at 6:00 every morning baking and preparing the store,” he added. “If you asked me to go in and bake right now, I could go in and bake and decorate. It’s something we took pride in.”

The three men are mostly focused on their family lives these days. Griffin says that the business hasn’t affected their friendship and their goal is to collectively make sure that never come into play.

“When we signed our LLC, we made sure there was no family member involvement,” he said. “We want to hold each other accountable.”

“We bump heads, but we have a strong friendship and we don’t let that get between us,” he added. “It’s a partnership. We’ll never let cupcakes get between our friendship.”