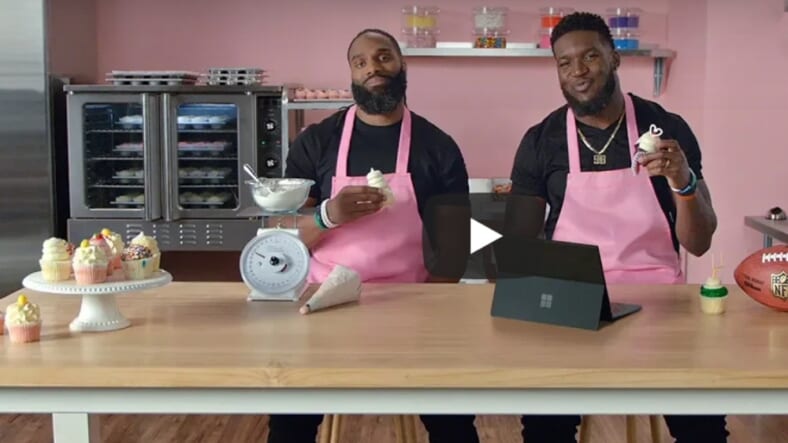 But two professional football players have teamed up to whip up the tasty treats as co-owners of a Gigi’s Cupcakes franchise in Bee Cave, Texas KVUE reports.

While the career change seems a little unorthodox for former Tennessee Titans player Michael Griffin and current Titans linebacker Brian Orakpo it’s a pretty sweet matchup for the football players turned franchise owners who wanted to come up with a plan to support their life after playing in the league.

The two players then linked up with Griffin’s childhood friend to round out their plan to purchase a franchise and launched Gigi’s Cupacakes in Bee Cave.

“We didn’t want to just jump out with something we were unfamiliar with,” Griffin told KVUE. “This was something simple. We looked into what do people require, need or want no matter what the situation may be and one thing we realized is no matter what everybody had a birthday every year and people always celebrate with cupcakes.”

“It’s just like when you play football, the repetitiveness allows you to come in a knock it out quickly,” said Griffin who enjoys serving up sweet treats like red velvet cupcakes.

Griffin played for the Texas Longhorns while in college and recently retired from the Tennessee Titans. Orakpo is still on the team’s roster.

But he’s also behind the counter tackling baked goods as the decorator.

“I call myself the head baker,” said Griffin. “I can put out large quantities of cupcakes.”

The men said they have to learn everything about operating a cupcake business and things seemed to be booming so much so that they’ve now opened up a shop in Austin, Texas.

Cupcake and football fans can also catch the budding bakers in a fun new commercial!