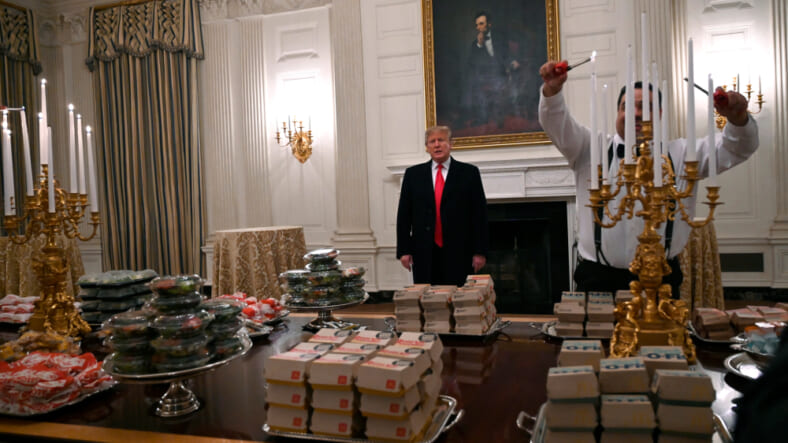 In this Jan. 14, 2019 photo, President Donald Trump talks to the media about the table full of fast food in the State Dining Room of the White House in Washington, for the reception for the Clemson Tigers. The partial government shutdown is hitting home for President Trump in a very personal way. He lives in government-run housing, after all. Just 21 of the roughly 80 people who help care for the White House _ from butlers to electricians to chefs _ are reporting to work. The rest have been furloughed. (AP Photo/Susan Walsh)

After the fallout from the now infamous White House “hamberder” feast that was fed to the Clemson championship football team, we now know that most of the Black football players sat out the trip to meet Trump.

— ‘I love my wife but I can’t let her take away my life!’: B. Smith’s husband responds to critics—

According to The Root, a Black football player who spoke on the condition of anonymity said that many players opted out of visiting the White House based on President’s Donald Trump’s “divisive politics” and “racism.”

“Players were talking amongst each other,” he said. “Everybody was like: ‘I’m not going to that.’”

According to the outlet, only 15 of the 57 Black student athletes at Clemson took the trip to Washington to attend.

Clemson’s coaching staff allowed the players to choose if they wanted to go on the trip or not, the outlet said.

The visit was meant to celebrate the Tigers’ 44-16 win over the University of Alabama to claim college football’s national championship which is their second in the last three years. Due to the fact that the White House staff was on furlough because of the federal government’s partial shutdown, Trump claimed to have paid to have a buffet of fast food burgers and pizza from McDonald’s, Wendy’s and Domino’s Pizza. The president referred to the offerings as “Great American Food” and he said he paid for the “Hamberders” himself.

Many people spoke out against Trump’s buffet choice. Rev. Jessie Jackson was not a fan of the gesture.

“I would like to invite the Clemson Tigers football team here for a great meal,” Strahan said on-the-air. “Come out here, everybody. Whoever can make it, we’ll hook you up with lobster …. Whatever you want, we’re gonna take care of you.”

Strahan’s cohost Sara Haines chimed in, suggesting they serve caviar to the team too.

When Haines commented that caviar can be pricey, Strahan replied, “It’s out of my pocket.” He added, “I’ve got you guys.”

Joe Galbraith, Clemson’s associate vice president for strategic communications, acknowledged the missing Black players in a statement Tuesday: “We had 76 student-athletes (approximately two-thirds of the team) make the trip to DC.”

He claimed that “for a variety of reasons, several players were not able to adjust schedules to make the trip.”

“On the championship game roster, 26 players had already received their bachelor’s degree, and had no planned obligations on campus beginning that week,” Galbraith said. “Other student-athletes had class obligations as the spring semester began the week prior.”