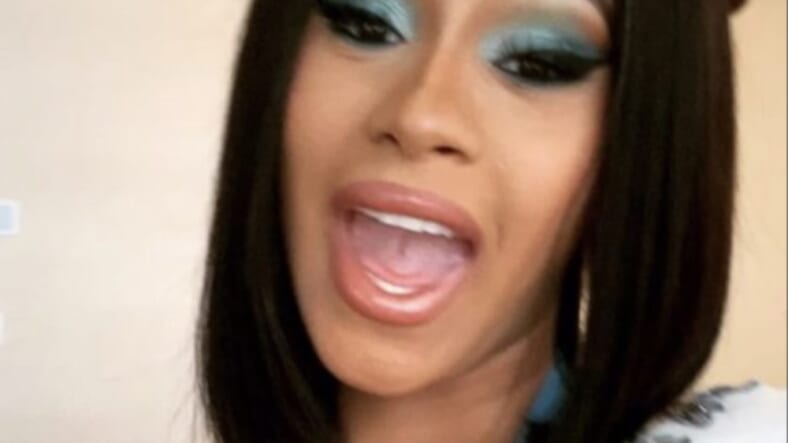 Cardi B on government shutdown is all of us. (Cardi B/Instagram)

There’s one person who is not surprised at Cardi B’s political prowess after she tore into President Trump over immigration issues: Her high school AP government teacher, The Daily Mail reports.

Joan Hill, a history teacher who taught the Money rapper once at the Renaissance High School for Musical Theater & Technology in the Bronx, sounded off against Cardi’s critics who “trashed her for representing a political voice” and told the haters to “STFU.”

Hill described the MC as an astute student who scored high on college level tests.

She wrote in a post that has gone viral:

Hill’s response comes on the heels of Cardi’s political rant Jan. 26, when she uploaded a video to sound off about thethen-ongoing government shutdown.

“Now, I don’t want to hear y’all motherf**kers talking about, “Oh, but Obama shut down the government for 17 days.” Yeah b**ch! For healthcare! So your grandma can check her blood pressure,” she continued before laying out a few choice expletives about female health needs.

Before long, Trump supporter Tomi Lahren, criticized Cardi for having a say and entering the political fray.

Cardi shot back “Leave me alone I will dog walk you,” calling Lahren out for her savage shade.

The two then exchanged a few choice words:

“I’m sure you would. Still doesn’t make your political rambling any less moronic. #BuildthatWall,” Lahren said.

Cardi replied: “You’re so blinded with racism that you don’t even realize the decisions the president you root for is destroying the country you claim to love so much.

“You are a perfect example on no matter how educated or smart you think you are you still a SHEEP!”

US representative, Alexandria Ocasio-Cortez, also weighed in to defend Cardi.

Why do people think they can mess with Bronx women without getting roasted?

They act as though our borough hasn’t been perfecting the clapback game since the Sugarhill Gang ? y’all just found it on Twitter https://t.co/pgxUU1BDJs

Since then, Cardi’s become the poster child for new, fresh political movement. Recently Cardi B got an invite from Dems to come to Iowa for political reception.

“As the center of the IA Caucuses, we have been honored to host @TeamPelosi, @CecileRichards, @KamalaHarris, @SenGillibrand, @PramilaJayapal, @Grace4NY, and many powerful women leaders,” the Polk County dems tweeted Tuesday.

“It only makes sense to invite @iamcardib to a reception of her choice while she’s here in May,” Polk Co Democrats tweeted.

Also “Cardi B 2020” started trending on Twitter, earning the rapper much respect in the political realm.