Check out the night's most outrageous looks. 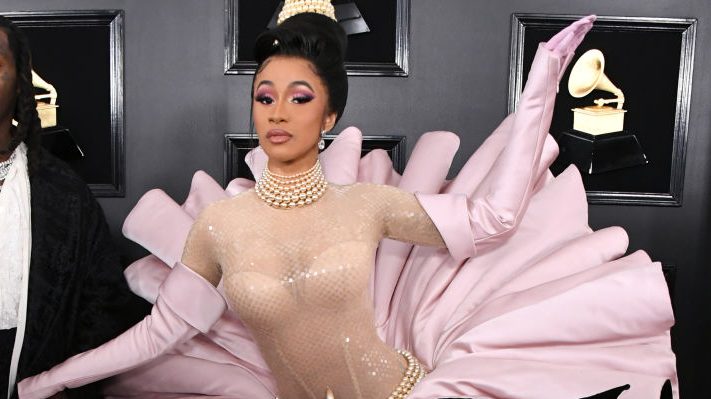 Music’s biggest stars are taking some major fashion risks at the GRAMMYs this year and we’ve got the rundown on the jaw-dropping ensembles on the red carpet.

Wild outfits seemed to be a trend this year and there was also lots of love in the air with couple like Cardi B and Offset, Alicia Keys and Swiss Beatz, and Travis Scott and Kylie flaunting their romances and their fashions.

Check out the the most outrageous looks of the night:

(Photo by Rich Fury/Getty Images for The Recording Academy)

For some reason, this Trump supporting-singer thought it would be cute to dress up as the border wall, putting barbed wire in her hair and carrying a MAGA purse. “I believe in building the wall to protect our southern border,” she told Los Angeles Times on the red carpet. “I’m part Latina, I’m black and I believe in what the president’s saying. This to me is a representation of that.”

The black-ish star donned a daring green pantsuit with an elaborate snake belt wrapped around her waist.

The newbie who is nominated for four awards including Artist of the Year and Best New Artist already picked up the prize for Best R&B Performance for her hit “Best Part.”

These lovebirds couldn’t keep their hands off of each other as they hit the carpet one day after celebrating their daughter’s first birthday. While the rapper who’s up for three awards looked pretty nice in his black suit, Kylie’s powder pink gloves were a little creepy.

While we’re loving the confidence this songbird is demonstrating with a fresh face, the dramatic train on her dress looked thick and heavy.

We’re excited to see what Fantasia serves up when she hits the GRAMMYs stage, as long as it’s not 101 spotted puppies.

Even though J. Lo is known for making all the right moves on the red carpet, this ensemble had her looking like a smooth criminal instead of a style icon.

We’re not quite sure what to make of Cardi B’s….gown? Clearly she’s sending a message that she’s fancy by dressing up like a pearl emerging from an oyster. Meanwhile, her estranged husband Offset looked like he was just trying to stay on her good side.

Janelle Monae shut down the carpet in this pointy-shouldered number that showed off every curve.

We can’t pretend to be anything but confused by this nominee’s outfit but he gets an A for commitment to that puzzling choice.

The rapper who’s known for talking tough in his rhymes looked awfully sparkly is his ill-fitting suit and was clearly worried about the rising rain after in those pants.

(Photo by Rich Fury/Getty Images for The Recording Academy)

George Clinton wore this to the GRAMMYs and that’s really all we can say about that.