Charlamagne Tha God, Angela Yee and DJ Envy have gone public with their objection to how 2020 presidential candidate Sen. Kamala Harris is being characterized by Fox News 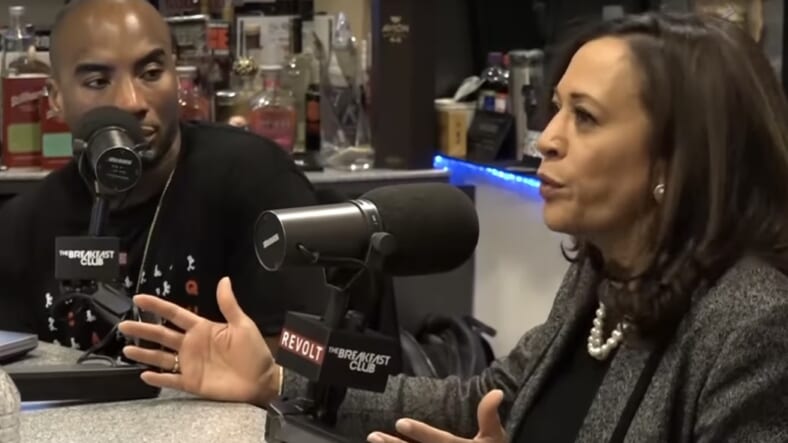 The hosts of the popular syndicated radio show “The Breakfast Club” are speaking up about what they believe is a fake controversy meant to undermine presidential hopeful Kamala Harris.

“They’ve been calling it ‘Reefergate,” host Charlamagne Tha God explained to Ari Melber Thursday evening, during a segment on MSNBC’s The Beat.

Charlamagne was upset about the unexpected fallout following an interview he and his Breakfast Show colleagues conducted with Sen. Harris last week which soon turned into an attack on her credibility.

READ MORE: Kamala Harris challenged for ‘miscommunication’ when asked about listening to Tupac and Snoop at HU

Many media outlets, most notably Fox News, accused the senator of being disingenuous and lying about her tastes in music while attending Howard University.

The answer seemed innocent enough, until viewers noted that both of Snoop and Tupac debuted as artists well after Harris was in college. A replay of the video shows the senator appeared to be responding to the question of her favorite music in general, not her favorite music to smoke to. But what should have been a simple incident of cross talk, became a scandal and was even given a nickname: Reefergate.”

When asked if Fox News lied to inflate the story into more than it was, Envy was emphatic with his response.

“Absolutely, positively lied,” he said. “We wanted to humanize her, not just talk about politics. Talk about what she likes, what she does. And I asked what she listens to, and she said she listens to Snoop Dogg and Tupac. At the same time, my co-host was still talking about the marijuana. And it was just a funny exchange. But she was actually answering me, and people took it she was answering Charlamagne, and said she was lying, which is not true.”

You can check out the full interview below.