NBA, FIBA set to launch league in Africa — with assist from Obama 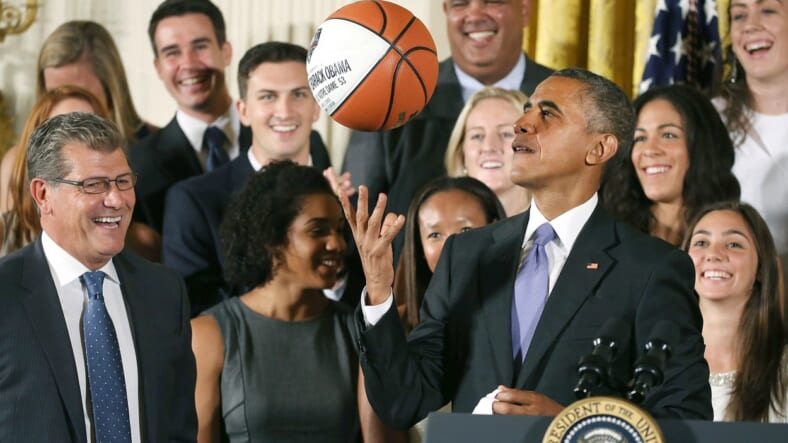 President Barack Obama tosses up a basketball given to him by coach Geno Auriemma (L) while honoring the 2015 NCAA Women’s Basketball Champion University of Connecticut Huskies. (Photo by Mark Wilson/Getty Images)

The NBA and the International Basketball Federation (FIBA), have joined forces to bring a basketball league to Africa, USA Today reports — and former president Barack Obama (who always boasted about his jump shot when he was in office) will play a part.

Obama is expected to take on an active role with the forthcoming Basketball Africa League which will feature 12 teams from across the continent. He offered his blessings via Twitter:

I’ve always loved basketball because it’s about building a team that’s equal to more than the sum of its parts. Glad to see this expansion into Africa because for a rising continent, this can be about a lot more than what happens on the court. https://t.co/lghcLaUN9a

“The Basketball Africa League is an important next step in our continued development of the game of basketball in Africa,” NBA commissioner Adam Silver in a statement. “Combined with our other programs on the continent, we are committed to using basketball as an economic engine to create new opportunities in sports, media and technology across Africa.”

The league, which is slated to launch in January 2020, stands as the NBA’s first partnership running a pro sports league outside of North America, according to reports.

According to USA Today, no more than two teams from one country can qualify for the league. And there is be a qualifying event of some sort in Africa to determine the make-up of the 2-team league.

READ MORE: Sixth-grade student who refused to stand for Pledge of Allegiance arrested at Florida school

“Mark Tatum and I had the pleasure of spending several hours over the past few months with President Obama, and we all know how much work he has been doing in Africa and what a fan of the sport of basketball he is,” Silver said.

“He has said ‘I want to be directly involved with these activities in Africa.’ He understands the economic opportunities in Africa. He’s personally a huge fan of the game, and in fact dedicated a court there recently with Masai. So while we’re still talking to him in terms of exactly what his role is going to be, we know he’s going to be directly involved in our activities there as well.”