A sixth-grader defied his teacher when he was asked to recite the pledge with his class, but his mother said the punishment was unfair 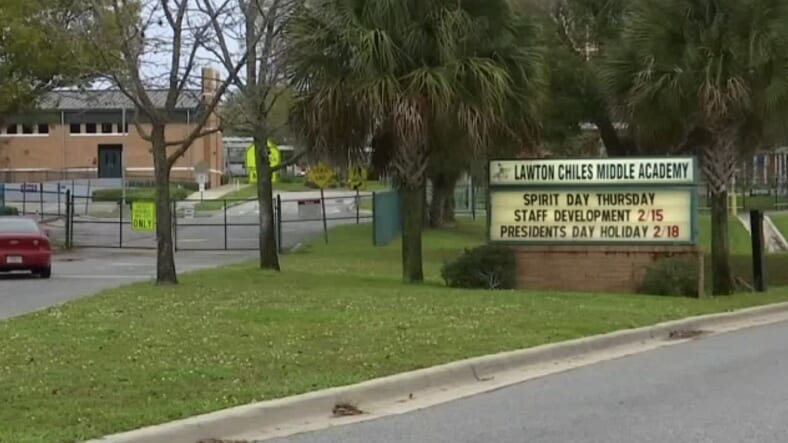 A sixth grade Florida student who invoked his rights and refused to stand and salute the American flag during the Pledge of Allegiance was arrested by police and charged with a misdemeanor for failing to follow a substitute’s demands and causing a disruption.

Police charged the unidentified 11-year-old student at Lawton Chiles Middle Academy with disrupting a school function and resisting arrest without violence after he was kicked out of class disobeying a substitute teacher’s commands to stand, Bay 9 News reports.

However, “students are not required to participate in the Pledge of Allegiance,” said Polk County Public Schools spokesman Kyle Kennedy.

Kennedy said the boy “was arrested after becoming disruptive and refusing to follow repeated instructions by school staff and law enforcement.”

The student reportedly explained to the teacher his reasons for not wanting to stand but was subsequently kicked out of class and had the cops called on him. He was also suspended for three days.

The student’s mother, Dhakira Talbot, was upset and said her son is a gifted student who has endured bullying on end at the school.

“I’m upset, I’m angry. I’m hurt,” she said. “Moreso for my son. My son has never been through anything like this. I feel like this should’ve been handled differently. If any disciplinary action should’ve been taken, it should’ve been with the school. He shouldn’t have been arrested.”

The student reportedly told the substitute teacher that the flag was a racist symbol and the national anthem was offensive to Black people.

In a statement to the district, the substitute teacher reportedly told the student, “Why if it was so bad here he did not go to another place to live.” She said he then said, “they brought me here.”

She claims he replied by saying, “Well you can always go back, because I came here from Cuba and the day I feel I’m not welcome here anymore I would find another place to live.”

She wrote, “Then I had to call the office because I did not want to continue dealing with him.”

Talbot said the teacher had the wrong approach.

“She was wrong. She was way out of place,” Talbot said. “If she felt like there was an issue with my son not standing for the flag, she should’ve resolved that in a way different manner than she did,” Talbot said.

According to the arrest affidavit, the student reportedly failed to follow a resource officer’s commands and made multiple threats that he would get the officer and the principal fired. It said the student was disruptive and called the school’s officials racist.

The student told Spectrum Bay News 9 he did no such thing.

“I want the charges dropped and I want the school to be held accountable for what happened because it shouldn’t have been handled the way it was handled,” Talbot said.

A spokeswoman with the school district said the substitute teacher wasn’t aware that students did not have to salute the flag and the sub will no longer be able to work at any of the district’s schools.

The matter is still under investigation.