Now that the officer who killed is found responsible, his death will not go unpunished like so many others.

Last week’s conviction of a Florida police officer in the 2015 shooting death of Corey Jones, an unarmed Black man who was waiting for roadside assistance, marks a turning point in how the public views and treats such cases, says civil rights attorney, Benjamin Crump.

Best known for representing the family of Trayvon Martin, Crump compared the unarmed Black teen fatally shot in 2012 by a self-described neighborhood watchman in Sanford, Fla. to the conviction of Nouman Raja. The 41-year old, off-duty police officer fatally shot 31-year old Jones who was a drummer and housing inspector as he waited by his disabled vehicle in Palm Beach Gardens, Fla. on October 18, 2015.

On Thursday, March 7, a jury convicted Raja of manslaughter and attempted murder. He faces a mandatory minimum of 25 years at sentencing, which will take place on April 26. This means he could spend his life in prison.

The case marked the first time in 30 years that an off-duty police officer in the state of Florida has received a conviction in such a shooting, National Public Radio reported. 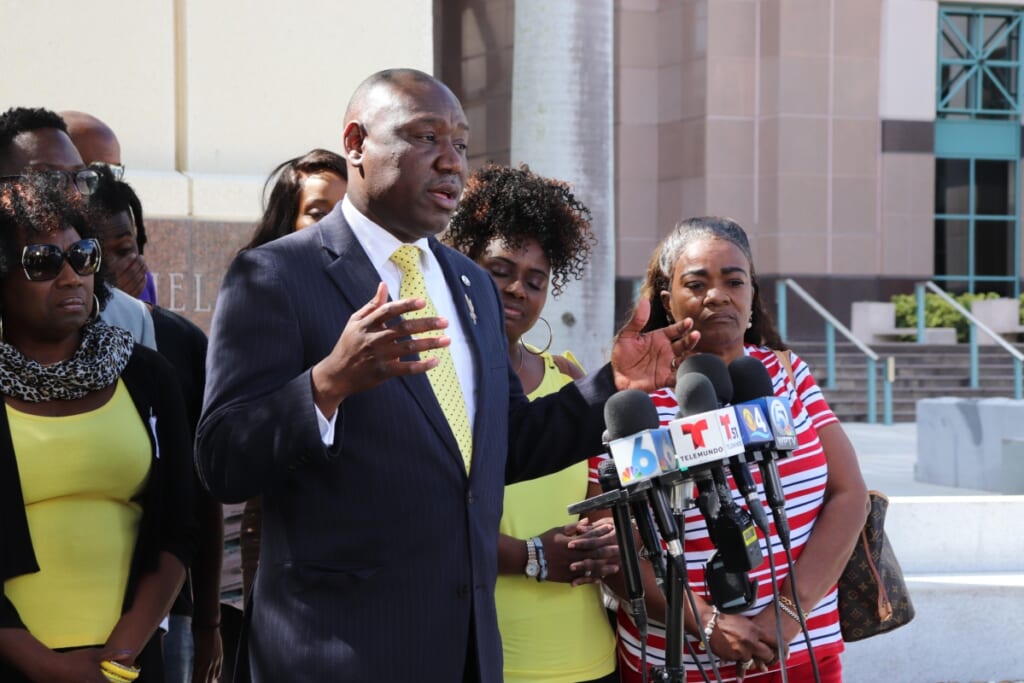 “We are honored to celebrate this verdict in the name of Corey Jones, but we celebrate with a heavy heart,” said Civil Rights attorney Ben Crump, who represents the interests of the Jones family.

“We are honored to celebrate this verdict in the name of Corey Jones, but we celebrate with a heavy heart,” Crump said in a statement. “Nothing can bring Corey back to his loved ones, but this victory against police brutality, this victory against Stand Your Ground (Florida law that permits civilians to use firearms when they feel threatened), means Corey did not die in vain.

A man’s life was stolen, but we must remember to keep the beat alive for Corey Jones and for racial injustice that plagues the society we live in today. Although nothing will reverse the death of an innocent man, a guilty verdict is a step in the right direction toward justice and healing.”

Raja, who is Asian, is a former Palm Beach Gardens police officer who was in plainclothes as he investigated an auto burglary investigation when he spotted Jones’ SUV at 3:15 a.m. on Oct. 18, 2015. 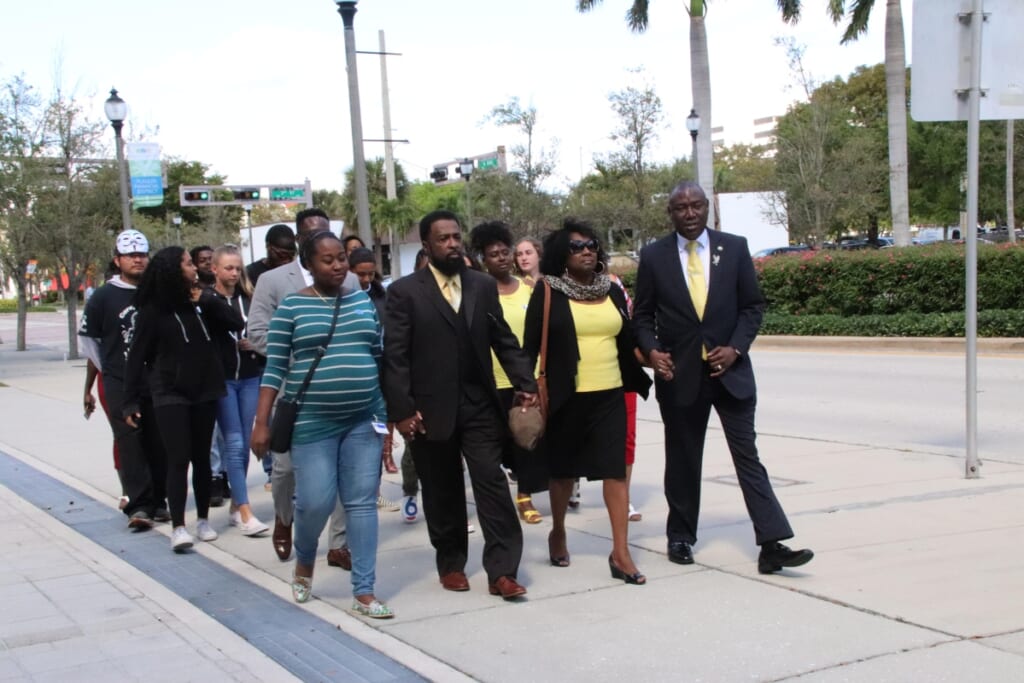 Attorney Ben Crump with Corey Jones’ family, including his parents, know with this guilty verdict that Corey did not die in vain.

Jones was on the phone with a tow truck dispatcher because his vehicle had stalled, according to NPR. Jones had a .38-caliber handgun in his car, but also had a permit to carry a concealed weapon. It was there to protect him and his drum set which is estimated at $10,000.

Raja never identified himself as a police officer and in the recording, is heard using an expletive as he tells Jones to raise his hands.

Prosecutors have said Jones pulled his gun and tried running away and Raja fired three more times, which led to Jones’ death. 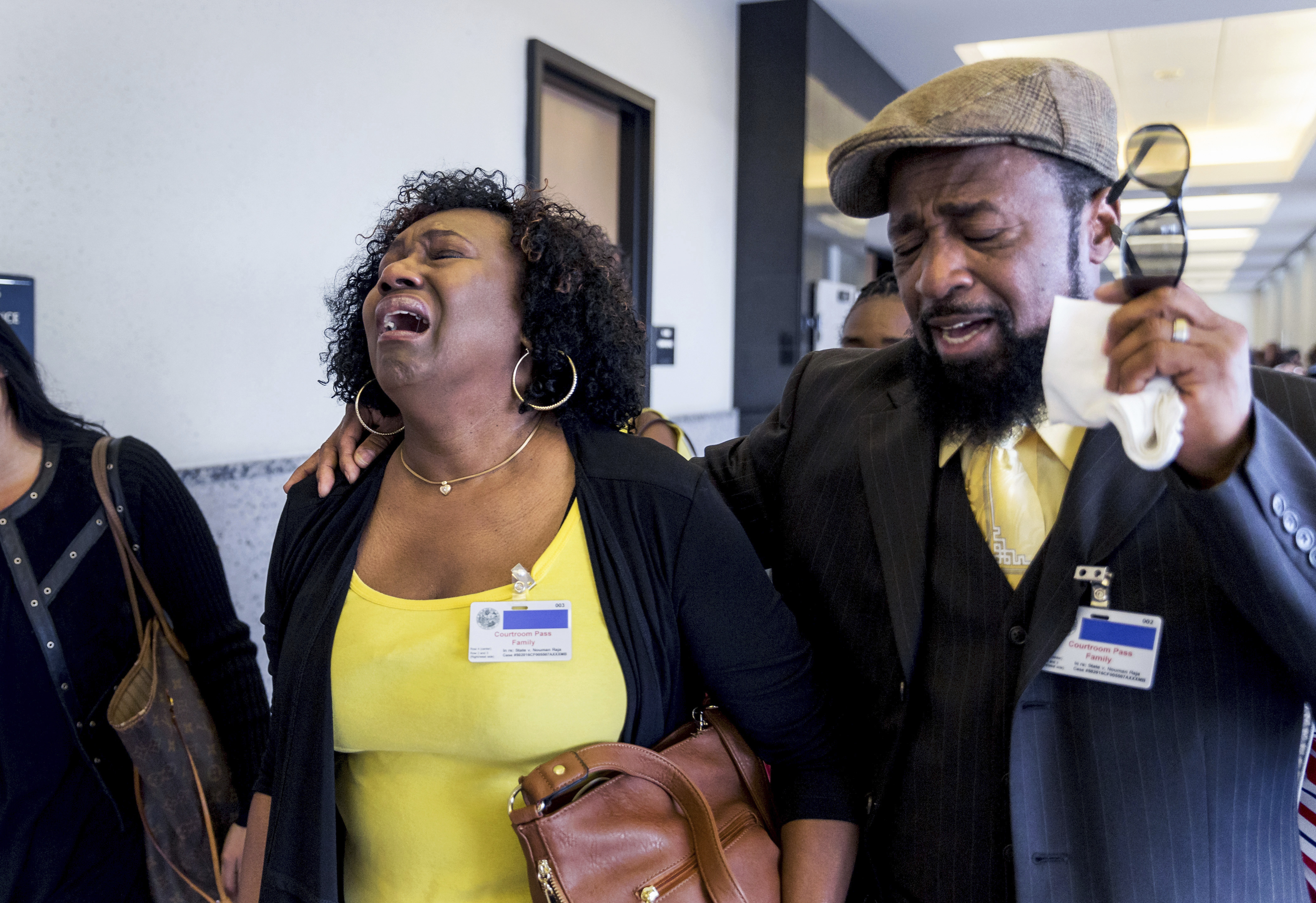 Kattie Jones and her husband, Clinton Jones, Sr., father of Corey Jones, walk down the hall from the courtroom after Nouman Raja was found guilty. (Greg Lovett/Palm Beach Post via AP, Pool)

The Jones family is full of Christian ministers, many of whom held prayer vigils during the trial. Jones was scheduled to perform at his church the morning he died.