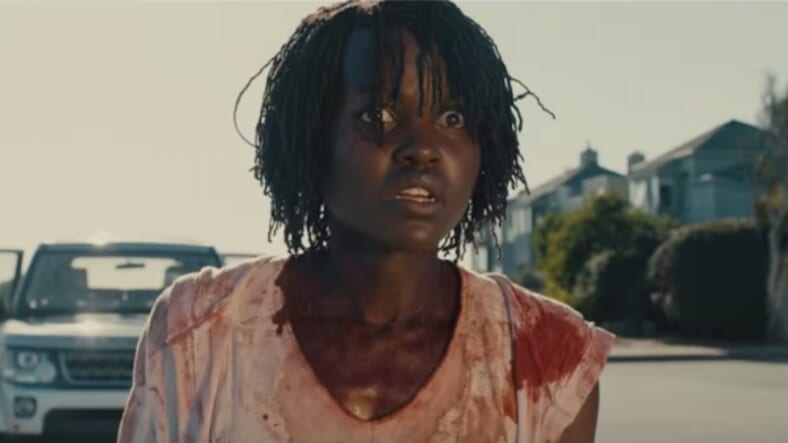 One week ago, the small theater at the Pacific Design Center in West Hollywood was a who’s who of Black Hollywood elite and they were all filled with anticipation ahead of the latest masterpiece from Jordan Peele, Us.

Tracee Ellis Ross, Robin Thede, Janelle Monae, John Legend, Chrissy Teigen, and Ryan Coogler were just a few of the famous faces who gathered for the #UsFirst screening while the film debuted at SXSW at the same time.
The carefully-curated crowd of celebrities and Black journalists may have missed the subtle statement on the screen before the opening credits rolled. “This is for… Us” was displayed on the big screen, a nod to the fact that Peele was intent on communicating who he made this movie for.
The highly-anticipated follow-up to Get Out is horrifying for sure, but not in the way you might expect. The imagery is haunting, but what’s more stirring are the emotions evoked by the film’s underlying narrative. Viewers will be asking themselves questions long after the credits role and that’s precisely the point.

Lupita Nyong’o‘s performance is a revelation and proof that she can carry a movie on her back, however ambitious it may be; and she masters two roles in one film, as do her costars; Winston Duke, Shahadi Wright Joseph, and Evan Alex.
Lupita Nyong’o plays Adelaide Wilson, a seemingly typical wife and mother of two who’s ready to enjoy a summer vacation to her childhood home in Santa Cruz, California. Eventually, she takes on another, more sinister role of Red; a woman who’s ready for a reckoning no one will be able to ignore.
The fact that Nyong’o is able to take on two distinctive characters, often in the same scene, so masterfully is nothing short of incredible. Her commitment to both roles makes her performance even more mesmerizing and it’s clear she set the bar for her talented costars.
She and Winston Duke have an undeniable chemistry, (which may be due in part to the fact that they both starred in Black Panther) and their attempt to convince us they’re part of a picture-perfect nuclear family is effortless. Meanwhile, they’re just as convincing when they tackle the roles of their much darker doppelgängers, highlighting the strength of their acting skills.

Before Jordan Peele Had Us Shook: 5 Classic Black horror films

The plot is challenging to say the least and viewers aren’t likely to grasp all of the messages Jordan Peele has wrapped up in it on their first attempt. It’s one of those films so rich and so deep that audiences will be left pondering what it all means long after they leave the theater.
“The idea for this movie came from a deep-seated fear in doppelgängers,” Peele says. “I was drawn to the idea that we are our own worst enemy. That’s something we all know intrinsically, but it’s a truth we tend to bury. We blame the outsider, we blame ‘the other.’ In this movie, the monster has our faces.”
Us is way too good to spoil, so we’ll leave the plot points out for now. In the meantime, know that aside from delivering an entertaining thrill ride that captures the most exciting elements of the horror genre that Black folks have been left out of for decades; Us offers insightful social commentary on who we are as individuals, and who we are as a country.
TheGrio sat down with Jordan Peele and the cast of Us to get a closer look at what went into creating the mind-blowing project, so stay tuned for those exclusive interviews next week.