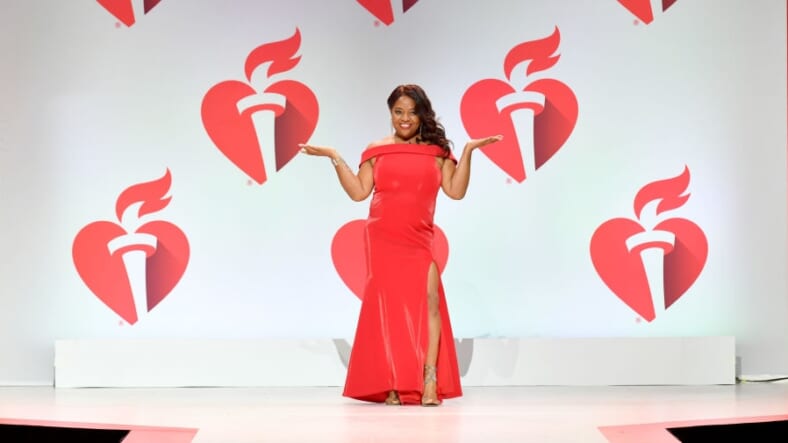 Sherri Shepherd didn't mince words when it came to condemning the parents involved in the university admissions scandal. (Photo by Slaven Vlasic/Getty Images for AHA)

Sherri Shepherd is the latest celebrity to weigh in on the rampant university admissions scandal that has captivated national headlines for the past week.

When TMZ’s paps ran into the comedian outside the famed Laugh Factory in West Hollywood on Friday night, she co-signed what many others have said about the controversy: it’s “white privilege” at its finest.

“Black people ain’t doing that,” Shepherd says. She even points out the irony in the college admissions scandal being a storyline on Full House, the comedy series on which actress Lori Loughlin starred as Aunt Becky. In the wake of the scandal, Loughlin has been dropped from the reboot of the series, Fuller House.

On Tuesday, news broke that the now disgraced actress and her husband were among a group of rich white folks charged with an alleged $25 million racketeering scheme that helped parents ensure that their “privileged” children would gain admission to elite universities. Desperate Housewives star Felicity Huffman was also included in the list of about 50 people charged in the scandal, E! News reports.

Loughlin and her fashion mogul husband, Mossimo Giannulli, stand accused of paying $500,000 to help their two daughters gain admission into the University of Southern California. it’s clear that Shepherd believes Loughlin wasted her money because now, Isabella and Olivia Jade Giannulli want nothing to do with USC. Both have dropped out after intense bullying backlash from the bribery case.

Olivia faced criticism over comments she made before starting classes in September about attending college.

“I don’t know how much of school I’m gonna attend,” she said in one of her beauty vlogs, referencing her busy schedule as a model, popular YouTuber and brand ambassador. “But I’m gonna go in and talk to my deans and everyone, and hope that I can try and balance it all. But I do want the experience of, like, game days, partying…I don’t really care about school, as you guys all know.”

Following the criticism, she addressed her “ignorant” comments in a follow-up video.

“I said something super ignorant and stupid, basically. And it totally came across that I’m ungrateful for college—I’m going to a really nice school. And it just kind of made it seem like I don’t care, I just want to brush it off,” she explained. “I’m just gonna be successful at YouTube and not have to worry about school. I watch it back and…I’m really disappointed in myself.”

Loughlin, whose net worth is reportedly $20 million, has also been ousted from the family-friendly Hallmark Channel. Olivia Jade has lost several endorsements, including those with TRESemme and Sephora.