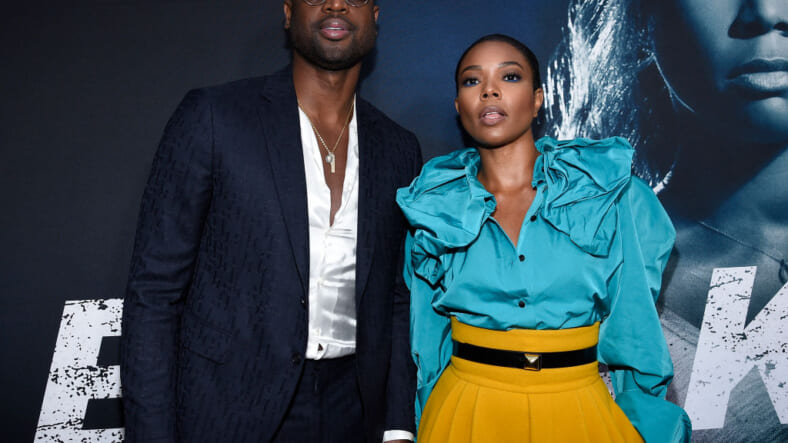 Cast member Gabrielle Union and her husband basketball player for the Miami Heat Dwyane Wade arrive for Universal Pictures’ special screening of the film “Breaking In” at ArcLight Cinemas on May 1, 2018 in Hollywood, California. (Photo by Kevork Djansezian/Getty Images)

Don’t expect to catch Gabrielle Union on the next season of Basketball Wives.

It’s a term that doesn’t define the actress just because she married to NBA player Dwyane Wade—and she wants to make that point crystal clear.

“How about Dwyane Wade is Gabrielle Union’s husband? There are no stereotypes or terms for men who are married to successful women. It’s only in the reverse.”

Union, who will next be seen in the new high-octane series LA’s Finest opposite Jessica Alba, says she still grapples with being referred to as “basketball wife” in the press, especially since she has established herself as a much-sought after film and TV actress, entrepreneur and author in her own right.

“I met [Dwyane] after getting divorced and failing miserably at marriage,” Union told InStyle. “I was already me and fully formed, financially solvent, and educated.”

Last month, she and La La Anthony (who is married to NBA All Star Carmelo Anthony) spoke at the National Basketball Wives Association Summit and the personal feelings attached to being referenced dismissively as a basketball wife.

“For many years, I personally fought against the term basketball wife,” said Anthony. “I was so focused on having my own and not being known as someone married to a basketball player. And to be honest with you, my marriage really suffered because of that.”

Anthony now admits that she’s no longer bothered by the moniker.

“I’m so proud to uplift my husband and not feel as though I’m sacrificing myself by doing so,” she said.

“I’m so sorry I had those judgments about basketball wives,” said Anthony.

Union, who is now basking in mommyhood after announcing the birth of their baby girl Kaavia James last November, has a more evolved perspective as well.

“What’s the point of getting a seat at the table if you’re looking at the door every time it opens to judge the person coming through who is trying to pull in a chair?” Union asked.