Tracy Morgan credits Jordan Peele with helping him to recover from his near-fatal car crash in 2014. 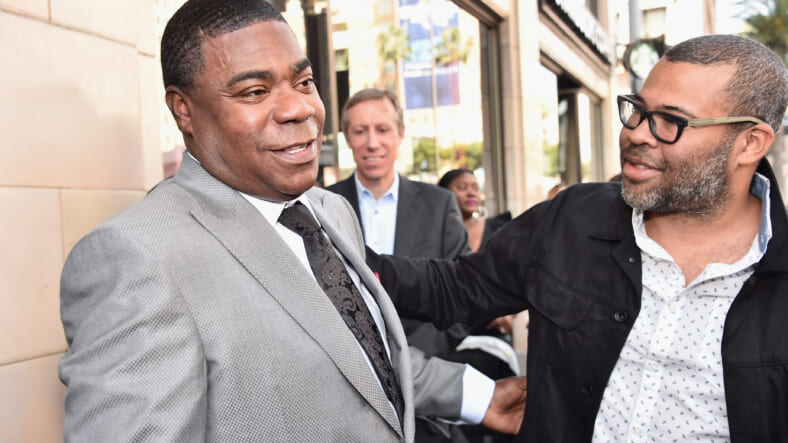 Actor Tracy Morgan is giving Jordan Peele accolades, for helping in his recovery after a near-fatal car crash in 2014.

According to PEOPLE, Peele helped Morgan get back to his career. This wasn’t through monetary gift, or by physical rehabilitation but by Morgan simply watching Peele’s comedy. Morgan sat down with Extra and said he watched the Us director’s hit show Key & Peele during his lengthy recovery process.

Almost five years ago, Morgan was struck by a Walmart truck on the New Jersey Turnpike, while riding in a limousine bus. The crash killed Morgan’s friend and collaborator, comedian James McNair, 62. Morgan was severely injured but used Peele’s comedy to uplift his spirits.

“That’s my brother,” he said. “That man was a part of my healing process, a big part of the healing process after I got hit by that truck. My youngest son turned me on to Key & Peele and I watched it every day.”

Morgan enjoyed Peele’s show much, he teamed up with him for the TV reboot of The Twilight Zone.

“I wanted to meet him — that’s how it got connected,” he said.

—Jordan Peele’s “Us” on track to set a new record, earn the top movie debut for an original horror flick—

Morgan told PEOPLE in 2017, that the accident made him motivated to continue his career.

“I got hit by a truck, it was a great story. So that’s what happened. I had a story to tell,” he said.

“When anything ever bad happened to me I made it funny and I turned it good,” Morgan added. “This was a bad thing that happened to me. I wanted to tell my story, but I also want to continue my standup career because all the great things that ever happened to me in my life came through standup.”

Morgan made his return to standup comedy in 2017, with the Netflix special Staying Alive. Morgan also stars in the TBS sitcom The Last O.G.