Have we learned nothing from the baseless conspiracy theories around other slain rappers like Pac and Biggie? 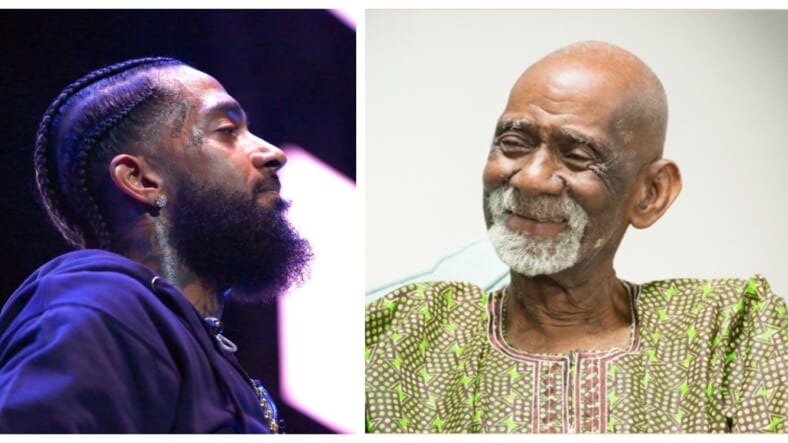 The conspiracy theories involving the Sunday shooting death of rapper Nipsey Hussle  made Monday a rather annoying day to be on the Internet.

Instead of doing what we should all be doing – mourning and reflecting on the man’s life and legacy – we’ve instead been subjected to loads of asinine conjecture regarding the circumstances of his murder…namely as it relates to Nipsey’s connection to Dr. Sebi, a Honduran herbalist named Alfredo Bowman who wasn’t a “doctor” in the technical sense.

Sebi promoted a plant-based diet to stave off the illnesses that we get from consuming processed foods – sage preventative medicine that any good doctor not in the “pocket” of Big Pharma will convey to their patients. But dude stepped into snake-oil salesman territory by claiming that his diets “cured” patients of HIV/AIDS and cancers that they already had. Sebi had numerous celebrity followers (including Michael Jackson and Lisa “Left Eye” Lopes) and got into legal trouble for his claims.

Sebi was arrested for twice for money laundering in 2016 and eventually died in custody. Though he died from complications from pneumonia at age 82, theorists still believe that Sebi was “silenced” by powerful forces seeking to keep him from spreading the cure to HIV/AIDS. Nipsey was a believer of Sebi’s, calling him out in his music and announcing on The Breakfast Club that he was working on a documentary on Sebi and his work. Nipsey’s murder sent conspiracy theorists into a Hotep two-step on social media, insisting that he was murdered over this documentary.

It’s not an insult of Nipsey to say that quite a few of the white people (and numerous Black people) I’ve queried since Sunday didn’t know who he was before his murder; he had a solid buzz in the hip-hop community, but he was not a Jay-Z-level global star. Even fewer people knew who Dr. Sebi was without consulting Wikipedia. Moreover, Sebi was by no means the progenitor of holistic medicine or the plant-based diet, and he’s far from the only person who espoused its merits.

This documentary – once completed – was never going to make theater owners consider pushing back the next Avengers movie for fear of competition. Not even Beyoncé could get a nation hooked to fast food to hit up a Sebi documentary in droves. So, the idea that the that U.S. Government and/or Big Pharma had an “Operation Murk Nipsey” mission on the books is patently absurd.

READ MORE: Long-Time Fans or New to ‘Victory Lap,’ the Hip Hop Community Mourns: Nipsey Hussle was one of ours

Authorities have actually identified Nipsey’s alleged killer, a man named Eric Holder (not the former attorney general), as someone who knew Nipsey. Even with that, folks are engaging in Olympic-caliber gymnastics to finger a dude whose rap name is “Shitty Cuz” as The White Man’s engine to “silence” Nipsey. There’s even concern that the erstwhile Mr. Mariah Carey’s life is in danger for offering to take over the unfinished documentary.

Imagine convincing yourself the government killed somebody over a Dr. Sebi doc and that you smarter than everybody else for figuring it out, just for a nigga named “Shitty Cuz” to have did it.

Heard It All Before

We’ve seen the conspiracy peanut gallery hop out for dead rappers before: Both Tupac Shakur and The Notorious B.I.G.’s murders remain cloaked in controversy since they’re both unsolved. Folks suggested back then that the FBI was involved in their murders in a conspiracy to silence outspoken Black folks, a la J. Edgar Hoover. Even I was briefly convinced as a teenager that ‘Pac was actually alive and on a beach in Laos drinking Mai Tais.

Black folks love a good conspiracy theory, in part because it just gives us something to talk about. Remember the first days following Jussie Smollett’s alleged attack? Twitter jockeys were convinced they knew every detail of what actually happened down to a tee, and they were all incorrect. Hell, you can still throw a stone in the Black Twitterverse and hit someone who believes the 4,985 women Bill Cosby allegedly sexually assaulted lied to take him down because he attempted to buy NBC in the early 1990s.

That said, we also have good reason to believe in certain conspiracies: the historical and social mistreatment of ethnic minorities by our government is well-documented. But there are lines of reason within all of this, and some of y’all need to fall back with this silly shit. Mourn Nipsey Hussle and wait for more information on his murder before you jump out loud, wrong and dumb.