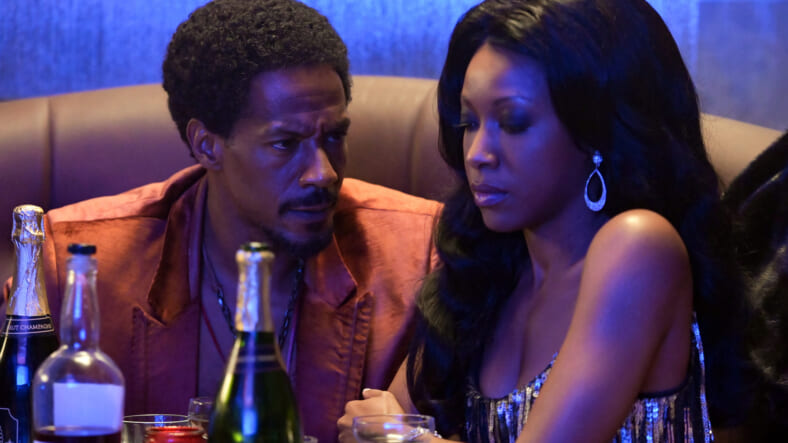 American Soul ended its first season with a bang—a performance from Ike and Tina Turner. McKinley Freeman and Gabrielle Dennis came together to play the iconic duo, but Dennis had all the attention and pressure. Just last year the actress, whose breakout role was as Janay on The Game in its resurrection on BET, turned heads with her surprising turn as Whitney Houston in BET’s The Bobby Brown Story. And now she has added Tina Turner to her repertoire.

On set in Atlanta for the season one finale, Dennis, who watched YouTube videos, including the Soul Train performance she recreates, to get into character, spoke about the role while getting her hair done. She admitted that she hesitated when the role came her way because she had just played Whitney Houston. “It did cross my mind. It was kind of like ‘okay she’s just going to play all the icons,’” Dennis laughed.

Ultimately she took on the role because “it’s different and it’s a one-off. It’s a one-episode situation. It’s not a mini-series, it’s not a film.” Plus, she felt in good company considering the others who have taken on roles throughout the show’s first season.

“I was actually honored to be called in to be included amongst the likes of Kelly Rowland (who played Gladys Knight) Michelle Williams (who played Diana Ross) and Wayne Brady (who played Little Richard). It’s just kind of fun to be a part of that list.”

It doesn’t hurt that she’s also a Tina Turner fan who counts “Proud Mary” as one of her karaoke go-to songs. “She’s just such a dynamic and unique, one of a kind artist,” Dennis shared. “She had that masculine energy, but then she was still very much so feminine. She was just bad ass.”

Although American Soul has been a bright spot for the network and black programming overall, showrunner and co-creator Devon Greggory didn’t see that at first. Initially he thought “what can I possibly do with Soul Train that’s interesting?” His then assistant who is now a staff writer on the show, Zach Ayers, urged him to really look at the show as “Mad Men with music.” In doing that, Greggory uncovered a story “about a culture, a country, a race, coming of age and finding their identity against the backdrop of this iconic show.”

Legendary casting agent Robi Reed, who now serves as Vice-President of Talent & Casting at BET and was a Soul Train dancer herself as a teenager in L.A., felt that Sinqua Walls, who is popular for playing Shawn on Power, was the right actor to play Don Cornelius, who built Soul Train from the ground up. “This seemed like the perfect role for him where he could really showcase all of his talents and, for the first time, be the lead.”

Don Cornelius was far from a perfect man. Some of the show’s biggest moments have been tackling his infidelity and how it affected his marriage to his wife Delores (Perri Camper), the mother of his two boys. Walls said that what we see is “the love is still there but the spirit is growing and changing.”

“He was always trying to balance his home life and entertainment and it’s very difficult,” said Tony Cornelius, Don Cornelius’s oldest son who has been on hand as executive producer to guide Walls and the story overall. “And sometimes when you have the kind of the laser focus that he had, you miss a couple of beats on the family side. He did the best that he could. And now that he’s gone, I’m realizing more and more that he did the best that he could based on the circumstances.”

Storylines that have nothing specifically to do with Cornelius’s actual life also colored American Soul’s first season, allowing folks like Kelly Price, who plays Brianne Clarke, the mother of two Soul Train dancers, to show they have other talents or giving a wider platform to Iantha Richardson who plays Tessa Lorraine, Soul Train’s lead choreographer. For Jason Dirden, who was better known for playing wayward minister Basie on Greenleaf, Gerald Aims has been a great opportunity to approach a “bad” guy differently.

“To me, he’s like an everyman. Although he’s a gangster and does some things that every man doesn’t do, at his core, he speaks in layman’s terms, you know, to where the everyman can understand what he’s trying to say and what he’s trying to achieve, which is why I think he’s so successful at being a hustler, because he connects with you.”

Playing Simone, a young woman who is a daddy’s girl in the throes of her first love and searching for stardom, has been a “learning experience” for Katlyn Nichol, a singer who was once signed to Mary J. Blige. As she has opened herself up to what acting has to offer, she has come to admire Simone’s ambition. Simone was the one who got her brother Kendall and herself on Soul Train as dancers. She was the one who pushed their group with her boyfriend JT further figuring out how to book studio time and shows.

“One of my favorite characteristics about Simone is that she is so driven, like Simone is going to make it happen,” Nichol said. “In the later episodes, [when] she makes a huge decision, it’s like ‘I have to do this for me.’”

Audiences have responded enthusiastically to American Soul. The show from Jesse Collins Entertainment, which brought the groundbreaking The New Edition Story to the network, was the #1 new black scripted drama for the 18-49 demo. Wisely BET picked it, along with Lena Waithe’s Boomerang, up for a second season.

“We are incredibly grateful to continue to tell the American Soul story. Season one was so well received by the culture and we feel that season two will be even more fun and exciting,” said Jesse Collins, one of the show’s executive producers, in a statement.