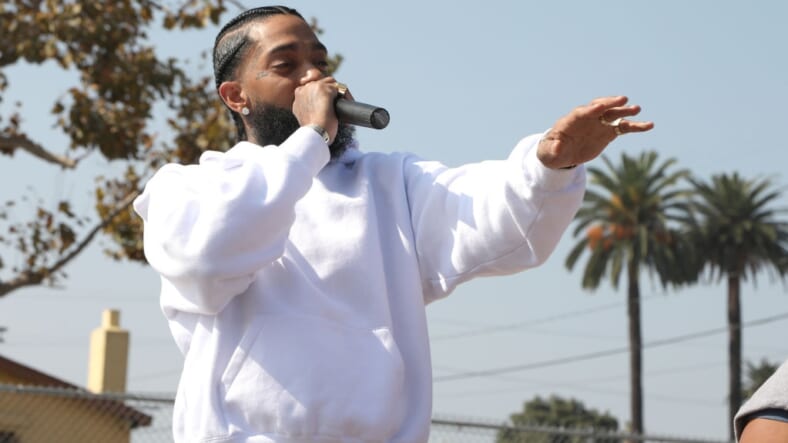 The family of slain rapper Nipsey Hussle was searching for a venue to accommodate the huge crowd expected to attend his memorial service. After reportedly rejecting several venues that only had a 2,000 seat capacity, TMZ confirms that Hussle’s memorial service will be held Thursday, April 11 at the Staples Center in Los Angeles.

The 21,000 seat venue previously hosted Michael Jackson’s memorial in 2009. According to social strategist and close family friend, Karen Civil, tickets to the memorial service will not be sold or made available to the public, as has been reported by several outlets.

I want to officially let @NipseyHussle fans & supporters know there will be NO selling of tickets to his funeral. A lot of incorrect information was released today, please know in the upcoming days and official statement will be made soon. ?

Hussle was one of three men shot at the store. Shortly before his senseless death, he sent out a cryptic tweet about “enemies.”

“Having strong enemies is a blessing,” he wrote.

The L.A. native leaves behind two children, a daughter from a previous relationship and a son with actress Lauren London.

Disturbing footage of the shooting hit the Internet immediately after the incident. The alleged gunman, 29-year-old Eric Holder, was apprehended two days after the killing and charged with one count of murder, two counts of attempted murder, and one count of possession of a firearm by a felon. Former O.J. Simpson prosecutor Chris Darden is representing the gunman, who has not yet entered a plea.

Holder faces life in prison if convicted on all charges. His bail has been set at $5 million and he will appear back in court on May 10.

READ MORE: Deadshot said to be dropped from ‘Suicide Squad’ reboot as Idris Elba takes over

Nispey Hussle is said to have had ties to the notorious Crips street gang, but that didn’t stop him from working with industry influencers like Drake, Childish Gambino, 50 Cent, Kendrick Lamar, Snoop Dogg, and many others.

He released several mixtapes over his 10-plus year career—including one priced at $100 a pop—but didn’t drop his first studio album, Victory Lap, until 2018. That recording earned him a 2019 Grammy nod for Best Rap Album.