For a lot of people he is still "ours" on the golf course. 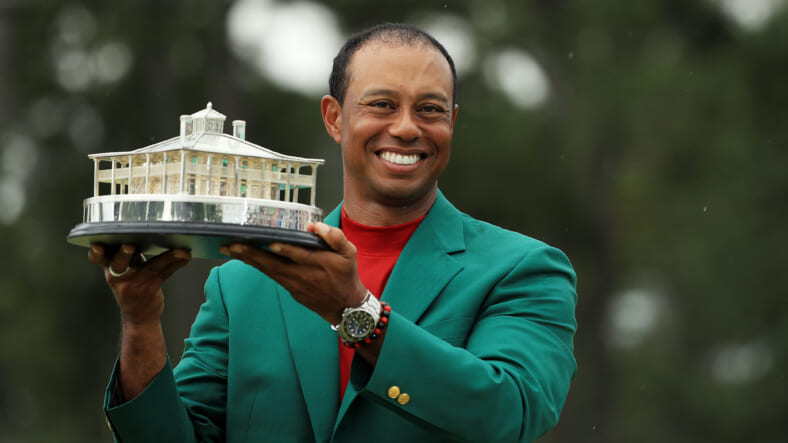 AUGUSTA, GEORGIA – APRIL 14: Tiger Woods of the United States celebrates with the Masters Trophy during the Green Jacket Ceremony after winning the Masters at Augusta National Golf Club on April 14, 2019 in Augusta, Georgia. (Photo by Mike Ehrmann/Getty Images)

Tiger Woods, aka Blasian Bomber, is back!

When I heard that Tiger Woods won his first Masters in 14 years, putting him right behind Jack Nicklaus (the Michael Jordan of golf) in number of overall major tournament wins in the entire sport (does that make Tiger, LeBron?), I didn’t think we would dedicate that much energy toward the win.

My social media feeds told a different story. Black folks were all up in Eldrick Woods’ love again like Serena Williams had just won Wimbledon. The outpouring of excitement over Tiger’s win felt like it was the late 1990s again, back when Puffy’s shiny suits were the move.

nothing displays america’s collective ability to compartmentalize quite like a tiger woods victory. we don’t even really like this dude but this feels amazing.

My initial surprise at the love is because I know Tiger’s relationship with the Black community is touchy, and that’s only because his relationship with himself as a Black man is dubious: Born of a Black U.S. Army officer daddy – and I mean, a Black-ass daddy named Earl from Kansas – and a Thai-Chinese-Dutch woman named Kultida whom Earl met while stationed in Thailand, Tiger was raised in Orange County a child golf prodigy, which might understandably give him a different understanding of Blackness.
He wrote in his memoir, The 1997 Masters: My Story, based on his historical first Masters win:

“I knew none of this meant, necessarily, things would change dramatically for minorities in golf. I hoped my win would encourage them to play, or to chase their dreams whatever they were. But it would have been naive of me to think my win would mean the end of ‘the look’ when a person from any minority walked into some golf clubs, especially the game’s private clubs. I only hoped my win, and how I won, might put a dent in the way people perceived black people. I hoped my win would open some doors for minorities. My biggest hope, though, was we could one day see one another as people and people alone. I wanted us to be color blind. Twenty years later, that has yet to happen.”

Tiger was very open in his desire to distance himself from being “pigeonholed” in his Blackness, despite there being zero ambiguity in his brown skin and facial features. He coined the now-infamous portmanteau “Cablinasian” to include his Asian and Native American ancestry (Hi, Elizabeth Warren!), as well as that one-quarter or so of whiteness in his daddy. He came up with “Cablinasian” in the 1990s before social media was a thing and during a time when it was more socially acceptable for Black folks to be on this we-are-the-world, “One race: Human” shit. But if Tiger was born 20 years later with all else held constant, Black Twitter would’ve cooked the “Ca,” the “Lin” and the “Asian” right out of his Black ass.

Of course, there’s also the fact that Tiger Woods reinforced the oft-repeated notion that prominent Black men always procure their alabaster queens by marrying Elin Nordegren, the whitest woman he could find on any continent. Every one of the many women with whom he allegedly cheated on Nordegren looked like 1990s Playboy centerfolds. His current girlfriend, Erica Herman, is also peak snow bunny.

When Snow White thot lust and Divorce ruin your good name what do u do? ??? U come back win the F’N, Masters! ??? Let the girls of Hooters and all the dive bars in Georgia know Ole Tiger Dub’s is byke!!!!! ??? FrFr tho. Congrats to the ? ??? #WinningIsSuchAGreatFU2TheHaters #IBetTheGuyThatWoreDrunkTigerTee #InspiredTiger #TigerWoodsOwnsYou #IBetEarlIsGladHisSonDidWell #TigerShudComeToTheBlueFlame ??‍♂️ Congrats Tiger #iJokeiKid #Salutes

Indeed, we’ve had trouble historically viewing Tiger as one of “us.” But, from the vantage point that he’s been extremely accomplished in sport that’s historically plagued with racism, he apparently retains a place at the cookout. Due to a myriad of racial barriers, the first Black man to even make an appearance at the Masters was 1975, so for a Black man to come in and whip ass two decades later is no small feat.

There’s also the sheer impressiveness of what he accomplished this weekend: Tiger hadn’t won a major tournament since the 2008 U.S. Open and endured several back surgeries (the medication from which he blamed on his 2017 DUI arrest) that even he likely figured would end his storied career. He took home the Green Jacket at age 43, well past his prime and plagued with medical issues – from a purely athletic standpoint, that’s objectively amazing.

‘He is not ever going to win another tournament…’

‘Give up while you’re ahead, retire with some dignity…’

‘The Tiger Woods we all knew, he will never ever be that guy again.’

Naysayers don’t get to decide.
YOU decide.

Map YOUR journey.
Walk YOUR path.
Play YOUR game. pic.twitter.com/mGCdbPcWnM

Same reason we love Apple products, and Nike… and Serena. They are all disruptors and innovators.

Tiger and Serena dominate sports we weren’t even supposed to be playing – due to geographic and economic barriers. They’re called “country club sports” for a reason…

So, just as we root for Venus and Serena Williams and the historical dent they placed in the world of tennis, and how we’ll root for whatever Black person who decides they can endure cold and ice long enough to strap on skates, pick up a hockey stick and kick ass in that sport, we’ll keep it going for Tiger Woods…apparent identity confusion be damned.