OPINION: While Morehouse College’s decision to admit trans men is significant, it’s completely at the expense of trans women 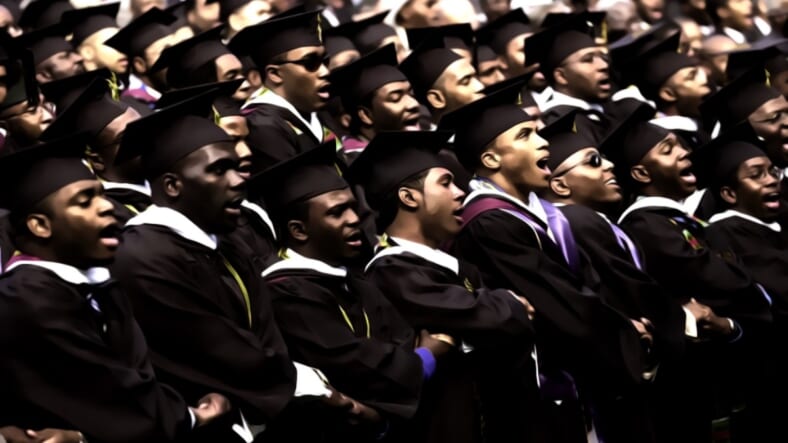 Members of the Morehouse College 2002 graduating class sing their school song during commencement ceremonies May 19, 2002 in Atlanta. (Photo by Erik S. Lesser/Getty Images)

On Saturday, April 13, Morehouse College — the storied, and only, African-American, mens college in Atlanta — seemingly made a progressive move in the fight for trans equality and human dignity by declaring that for the first time it would begin to admit trans men.

Issuing a statement that was music to the ears of mainstream LGBTQ+ organizations like the Human Rights Campaign, Terrance Dixon, Morehouse’s Vice President for Enrollment Management said, “In a rapidly changing world that includes a better understanding of gender identity, we’re proud to expand our admissions policy.”

Buried in the official statement on its new approach, Morehouse dropped a major bombshell, which quickly exploded the facade of their supposed new way.

In a regressive, anti-trans move, Morehouse also announced that it will expel any student who transitions from male to female, subject to appeal. It does so in a sweeping way where gender-non conforming (GNC) students, who express femininity, could also face the boot. Doing so only further reinforces the stigma which fuels violence against trans women, as well as those who are femme identified, and it is the latest example of the interests of Black men trumping those of Black women in the fight for Black liberation in our community.

I first learned of the Morehouse College policy just days before it was announced while screening the latest episode of my docuseries, “TransLash,” which explores what it is like to be a Black trans woman at a time of social backlash, at Spelman College.

When the anti-trans woman and gender non-conforming stance of Spelman’s brother institution was brought up during the Q&A, the room sat in stunned silence. That’s likely because Spelman, which stated in 2017 that it would accept trans women applicants, does not expel those who transition from female to male or have masculine gender identities.

I encourage y’all to read Morehouse’s new Trans policy CAREFULLY. This ain’t it. Any student who who transitions from M to F or begins to self-identify as a woman/femme while at Morehouse will no longer be eligible to matriculate at Morehouse College.

In fact, Spelman’s approach, consistent with that of most women’s colleges across the country, underscores the point that the choice between maintaining the integrity of gendered institutions and having students enrolled who express gender differently is a false one.

Did you know that Morehouse currently has two trans women students? Right now, it is both a men’s college and a place where Black femme identities can co-exist. The newly announced policy contradicts the school’s present reality.

“This move is happening at the expense of other marginalized people and genders,” says Ramon Johnson, who identifies as gender-non conforming and graduated from Morehouse in 2018. Johnson was once the former president of the college’s LGBTQ organization, “Safe Space” and is now a candidate for a Master’s in Gender Studies at New York University.

When Morehouse was founded in 1867, the idea of educating former slaves was a radical notion. Only a few years earlier teaching black folks how to read was illegal. So Morehouse admitting trans students is a radical now as its founding was then. We must embrace change.

Violence against the trans community

Unfortunately the dismissive, Black-and-white gender choices made by organizations like Morehouse have consequences.

According to the FBI, anti-LGBTQ hate crimes are on the rise with an increases in both 2016 and 2017. As the Anti-violence Project (AVP) points out, it is Black trans women who bear the brunt of hate-violence homicides. In fact, most Black trans women who lose their lives to violence will do so before the age of 35.

Just days ago in Dallas, a Black trans woman named Muhlaysia Booker was attacked in broad daylight for no reason other than the fact that her assailant was given $200 by a stranger to set upon after. After being told, “the money is in your pocket,” Edward Thomas began his assault.

Other men joined in and turned the scene into a melee. Booker was only pulled to safety by other women who came to her rescue. The entire incident highlights that violence can only thrive in a larger, permissive ecosystem of hate.

Bev Tillery, president of AVP, who is Black and queer, believes that there is more to this kind of extreme aggression than meets the eye.

READ MORE: ‘She did not deserve that’: Transgender woman’s fiancé speaks out after fatal shooting

“Violence is never violence by itself because it takes place against the backdrop of cultural, political and policy hostilities which are actually different forms of violence,” said Tillery.

That’s why the Morehouse policy is so dangerous. By targeting Black trans women and those with non-masculine gender identities for expulsion, Morehouse is contributing to the notion of the expendability of Black women and really, Black lives.

“Among all-male schools, Morehouse is the first in the country to adopt a transgender policy. Still, some students and alumni say the school’s policy is not as progressive as it first looks.” https://t.co/VXHovwQWcV

We know that teens and young adults are highly susceptible to bullying and social exclusion. Most LGBTQ+ youth commit suicide within the same age range when they would be attending Morehouse. It seems if Morehouse is willing to put masculinity above the wellbeing of these young people’s lives.

The question is why.

One answer is that within the context of white patriarchy, where authority, privilege and power accrue to white men at the expense of everyone else, Black masculinity is actually quite fragile. Rather than work to destroy the system that excludes them, Black men have sought throughout history to replicate and amplify it.

READ MORE: ‘God is Trans’: A review of a bold new exhibit in Brooklyn shaking up the art world

Dr. Alix Chapman, assistant professor of Comparative Women’s Studies at Spelman College explained, “So much of our ideas about Black liberation are tied to lifting up Black men while neglecting, and sometimes sacrificing, Black women. These forms of misogyny are not only patriarchal but anti-Black. We need to move away from the idea that femininity  is a threat to Black men’s progress

And, this is the core point.

In order for Black people to truly be free, all Black people must be free. Putting the interests of some before others has not worked. This means that full equality and inclusion for Black trans women is essential for the equality of all people of African descent. We simply can’t leave anyone out nor can we leave anyone behind.

Morehouse College, unfortunately, has failed to figure this out since its founding in 1867.  For the sake of us all, let’s hope it does so soon.

Imara Jones is the creator of “TransLash,” a four-part web docuseries about what it is like to be a trans woman of color at a time of social backlash. She is a Fellow-in-Residence at The New York Women’s Foundation and is on the board of the Anti-Violence Project.