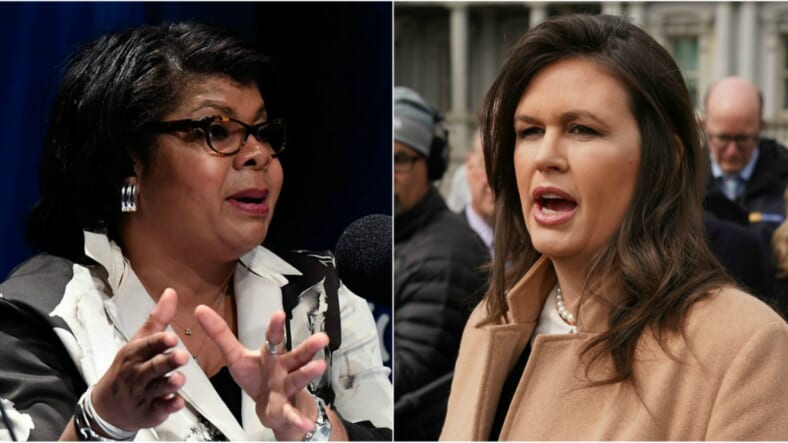 In perhaps a demonstration of the power of the press, a call by veteran Washington journalist April Ryan for the firing of White House press secretary Sarah Huckabee Sanders has spawned two trending hashtags on Twitter and multiple news stories.

READ MORE: April Ryan and Meghan McCain spar on ‘The View’ over political accusations against the press

“Not only does she not have any credibility left, she lied,” Ryan, who also serves as White House correspondent for American Urban Radio Networks, told Burnett. “She outright lied and the people, the American people, can’t trust her. They can’t trust what’s said from the president’s mouthpiece, spokesperson, from the people’s house.

“Therefore, she should be let go; she should be fired; end of story,” Ryan continued. “When there is a lack of credibility there, you have to start … lopping the heads off. It’s ‘Fire me Thursday’ or ‘Fire me, Good Friday.’ She needs to go.”

Ryan was referring to the fact that Sanders told the press in May of 2017, just after the firing of Comey, that “countless” FBI agents had lost confidence in Comey, but the recently released report by Mueller indicated that Sanders told government investigators that her claim was “a slip of the tongue” and “not founded on anything.”

READ MORE: Reporter April Ryan on being the White House “whipping post” and why she can’t fix her face

Sanders responded to the discrepancy Thursday in conversation with Fox News’ Sean Hannity, saying she was wrong to use the word “countless” but that it was “not untrue” that a number of current and former agents referred to Comey as a “disgraced leaker,” The Hill reported.

The hashtags #ResignSarah and #FireSarahSanders were trending on Twitter Friday as word spread of Ryan’s call.

In her conversation with Burnett, Ryan said it is wrong for Sanders to make reference to the phrase “fake news” when she has been spreading falsehoods.

“Sarah plays a dangerous game in that room,” Ryan said of the room on White House grounds where Sanders holds her press conferences. “The game is dangerous because she’s lying to the American public.”