Olympia Auset is fighting food deserts in the Black community through entrepreneurship and innovation. 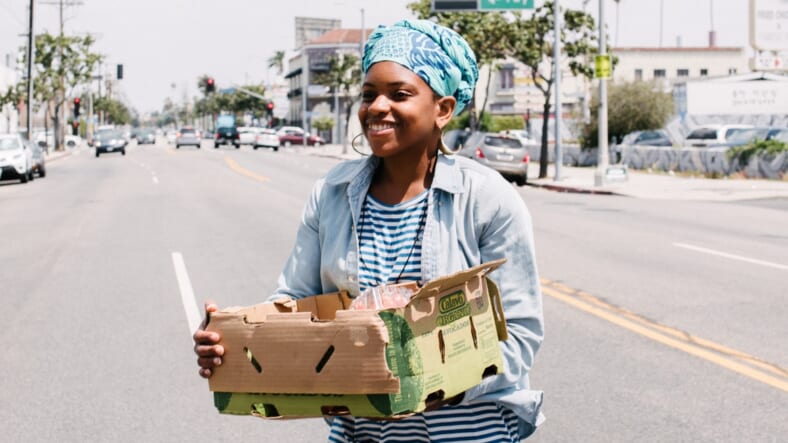 Olympia Auset sells fresh produce in her neighborhood. (Photo: John Francis Peters)
When L.A. rapper, entrepreneur and activist, Nipsey Hussle, died last month, he was in the midst of inspiring a health revolution for the Black community.

His advocacy for fresh food and the production of a documentary on holistic healer, Dr. Sebi, were just glimpses of a growing movement to expose how deadly unhealthy food is in African-American communities.

“This is the thing that’s killing us the most and it’s making it so that we can’t pass on that wisdom to our children because we’re dying too early,” she told theGrio in a recent interview.

Auset, who runs a low-cost organic grocery service and pop up shop called SÜPRMARKT, was deeply touched by the news of Hussle’s death.

In response to his passing, Auset gave away free food at the local Underground Museum and opened up about his impact in a YouTube video.

“That’s just one small way I can contribute…This is just another reason for us to go eight times harder.”

Eating To Thrive, Not Survive

In neighborhoods where liquor stores and fried chicken joints are sprinkled on every block, Black Americans are often left starving for healthy food options.

“When I lived in a food desert, I would ride on the bus for two hours every time I wanted to get fresh food,” Auset recalled.

The isolation from anything fresh, organic and green has resulted in the terms food desert, food oppression and food apartheid to describe what has become a growing epidemic. The USDA (U.S. Department of Agriculture) even has an online food desert tracker which shows what cities are mostly like to be without accessible supermarkets.

“You find it happens quite often in our community; the Black community. That came to be by design and it’s having an effect on us,” said Auset.

According to analysis by Auset’s team, there are only 60 full-service grocery stores to serve 1.3 million people in South Los Angeles, leaving people with little to no choice but to eat from corner stores that only provide prepackaged foods heavy on the salt, fat and additives.

Once she noticed a pattern of family friends who were perishing from preventable health related issues, Auset, a Howard University graduate who became a vegan 10 years ago, decided to put her hustle and book smarts to work.

She started by creating a new business model. If companies wouldn’t bring healthy food to inner city neighborhoods, then she would bring it to them.

Olympia Auset (right) speaks about her fight against food deserts at the Titan Generator in Austin, TX. (theGrio)

“We go to communities where there’s not a lot of access to fresh food. You can order groceries, have it delivered to your house, or you can pick it up and customize it however you want,” Auset tells theGrio.

She even offers “scholarships” providing produce for 10 days to lucky customers who can then participate in a juice cleanse challenge.

“A big part of our mission is like eradicating that feeling people have that I can’t afford to eat well,” she explains.

Black Business For Us By Us

It’s this innovation tied along to her sense of empathy that made her the perfect candidate for a special business accelerator (a mini-boot camp for entrepreneurs) called Titan Generator.

In March during SXSW (South By Southwest) 2019, Auset flew to Austin, TX to meet with other business-owners of color looking to solve big world problems.

“When you’re a first generation entrepreneur and maybe you didn’t have examples of, like, seeing other people do it in your family,” said Auset. “You start to understand that you can’t do everything yourself.”

(We visited SXSW to see how Black entrepreneurs are innovating.)

Auset says on the day Nipsey Hussle died, she learned that a health shop near his Marathon Clothing Store called Mr. Wisdom’s had been sold away and closed up.
Now it’s her mission to buy that store and reopen it by starting an Indiegogo crowdfunding campaign, which will launch later this month on May 22nd.
“We hope to buy the historic house that once housed Mr. Wisdom’s health foods & provide healthy, affordable, safe products and goods to the community,” said Auset on her campaign launch page keepslausonfresh.net.

“I knew I couldn’t just come into my community and be like, ‘Y’all need to eat better because X, Y, Z,” she explained.

“There needs to be food here in order for people to actually make the change.”

Watch our interview with Olympia Auset above and read more about Black entrepreneurs making a difference on theGrio’s Living Section.