The name of Lillian Gish, a storied actress whose first film appearance was in 'The Birth of a Nation' a film widely regarded as overtly racist, will be removed from a campus theater 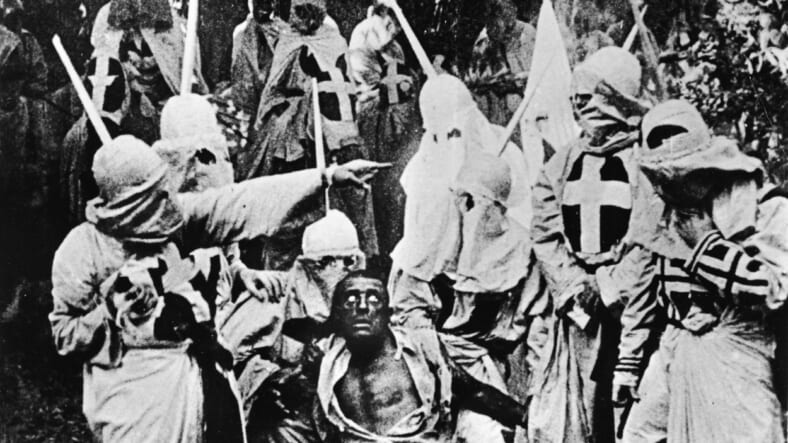 Actors costumed in the full regalia of the Ku Klux Klan chase down a white actor in blackface in a still from 'The Birth of a Nation,' the first-ever feature-length film, directed by D. W. Griffith, California, 1914. (Photo by Hulton Archive/Getty Images)

Bowling Green State University is removing from its theater the name of an actress tied to a century old movie now considered synonymous with racism.

The theater at the school just south of Toledo, Ohio, has honored actresses Dorothy and Lillian Gish for 40 years, but after students at its Black Student Union questioned acknowledging Lillian, who was the female lead in the 1915 silent film The Birth of a Nation, trustees voted 7-0 to remove the name, The Toledo Blade reports.

The film, directed by D.B. Griffiths, and written by Thomas Dixon Jr., who adapted the film from his book The Clansman, is has long been known for its overtly racist and pro-Confederate themes and depiction of the Ku Klux Klan as heroic. It is considered the first full-length feature film.

Its success is credited with helping popularize the Klan, which eventually became one of the most influential and dangerous organizations in the country. Meanwhile, the film was actually the first to be shown in the White House, screened by President Woodrow Wilson, and at the same time several cities including Chicago, Denver and Minneapolis refused to show it after riots broke out over it in Boston and Philadelphia.

According to a report issued by a university task force last month, “The Birth of a Nation” contributed to an “intimidating, even hostile, educational environment.”

The report also stated that although the Gish sisters, “do not appear to have been advocates for racist or exclusionary practices or perspectives” the content and historical impact of an actor’s work should be taken into account.

Although the film received backlash, Griffiths, the son of a Confederate officer, was reportedly shocked that anyone found the work offensive and followed it up with another film entitled Intolerance: Love’s Struggle Through the Ages in 1916.

READ MORE: Blacks are ‘raping our women’ and ‘taking over’: Decoding the myth that breeds white supremacists

BGSU President Rodney Rogers said about much thought and careful consideration of the task force of students, faculty, and staff, which was led by the efforts of College of Arts and Sciences Dean Ray Craig, it was the right move to make.

“We struggled with historical issues in today’s time and I think that, at the end of the day, that’s what universities are all about,” Rogers said.

“As a public university we engage in these discussions and debates,” he said. “While not everyone will agree with this decision, I know, this is what makes strong democracy. We listen to each other, learn from each other and move forward.”

A new name for the theater has not yet been decided.

The Birth of a Nation’s copyright was not renewed and it went into public domain, where it can easily be viewed by anyone and is readily available online.