OPINION: The ex-Second Lady saying it's time to move on from her husband's treatment of Anita Hill is not helping her husband, although he may have the best chance of unseating Donald Trump 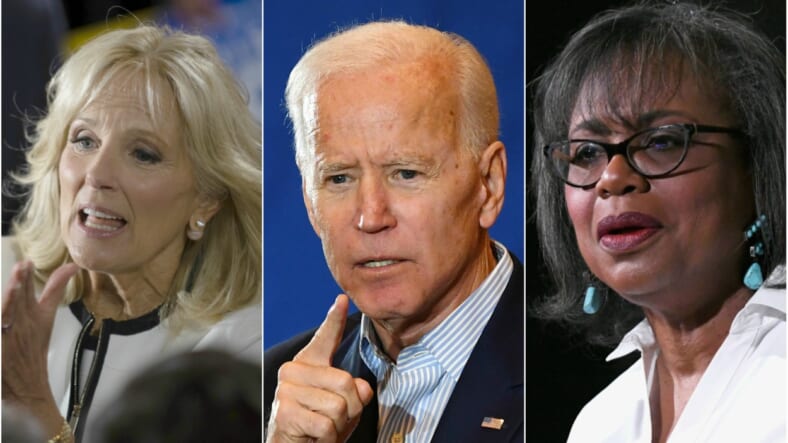 Despite Joe Biden becoming an increasingly polarizing figure in many Black circles, I’ve been pretty transparent about my belief that (currently) the former vice president is probably our best bet to get President Trump out of office in 2020.

Does this mean I think Biden is perfect and above reproach? Of course not. No career politician has clean hands and voters have now gotten a lot more savvy in seeing through political smokescreens.

But, as I’ve said on several occasions it’s completely possible to hold someone accountable, without overzealously ascribing to “cancel culture,” especially when the future of our country is on the line. So I welcome those who demand Biden atone for his sins, without that taking away an ounce of the support I plan to put behind his candidacy if he wins the prelims.

However, this week his wife Jill Biden unexpectedly tested my non-emotional, “we need to win!” mentality, and had me seeing red as my colleague informed me about how she responded to concerns about her husband’s mistreatment of law professor Anita Hill in the past.

He had ONE job

Apparently, during a recent chat with NPR, Mrs. Biden (for whom who I’ve had nothing but respect — up until this point), was asked about the renewed controversy then-Senator Biden’s sloppy handling of the 1991 Supreme Court confirmation hearings for Clarence Thomas.

At the time of the hearings, Biden chaired the Senate Judiciary Committee, and was directly responsible for setting the tone in how Hill would be treated by all the old white men glaring at her and demanding she prove herself. His duty was to ensure the proceedings were fairly executed, and also ensure that the numerous corroborating witnesses — who like Hill, claimed they’d been harassed by Thomas — were able to testify and corroborate that he had a history of bad behavior.

Unfortunately, none of that happened.

READ MORE: Must be nice: Meghan McCain is the ‘angry Black woman’ actual Black women don’t get to be

Instead the other witnesses were tricked into not attending the hearings, Hill was isolated and fed to the wolves, and her public image was repeated dragged through the mud, while Biden stood by and watched it all happen…even though he believed her and voted in her favor after the damage had been done.

It was a betrayal of pretty epic proportions.

Which is why I can say in no uncertain terms, that in 1991 Biden failed not only Anita Hill, but also all the women in this country, who saw this landmark case as their opportunity to finally be treated as equals in the work place.

Which is exactly what he needs to say because there is simply no excusing his behavior back then.

But up until this week, one would think that Jill Biden, whose assured us that Joe has evolved since that cowardly low point in his career, AND who is also a close friend to our forever First Lady Michelle Obama, would have some further insights into her husband’s growth.

When I heard she was going to respond to the Hill controversy I just assumed that as a woman, she’d be able to elevate this conversation from a place of sisterhood. And boy was I wrong!

What happened to sisterhood?

White women have our backs and will fight for us as much as we fight for them right? I mean, isn’t this what white feminists tell Black women who continue to give them the side-eye when they imply that our gender is somehow a more pressing issue than our race?

According to that assertion, this should’ve been the very moment that the former Second Lady grabbed the mic and schooled everybody listening to NPR on how thoroughly she put her foot up her husband’s behind and demanded he finally do right by Anita.

However, instead all she said was, “He feels badly. He apologized for the way the hearings were run. And so now it’s kind of — it’s time to move on.”

Waaaaaaaaait. Hold up! What part of the game is that fam?

READ MORE: Biden over Booker or Harris?: Why Black voters may have to check their allegiances in 2020

It would be one thing if Biden had realized the error of his ways years ago outside of the spotlight, and had rebuilt his relationship with Hill; showing through actions (and not just words) that he realized how much his unwillingness to step up to the bullies in the GOP almost ruined her career. That would have shown they sincerely made amends and make the public’s outrage feel outdated and unwarranted.

But what actually happened over here in the real world, is that Biden pretty much ignored his role in the Clarence Thomas case for over 20 years and didn’t even call Hill to discuss it until a few weeks ago after it was clear he was running for president and needed to address the skeletons in his closet.

I have milk in my fridge older than Biden’s apology.

And so for his wife to even fix her mouth to imply that anyone, let alone other women, “move on” from this situation that her husband let fester for almost three decades is asinine.

It also underlines why Black women continue to be weary when trying to form feminist allegiances with our white sisters. A woman at the top of the social food chain, who is also married to a man at the very tippy top of the social food chain, is simply not equipped to fully understand what it’s like for those of us who live towards the bottom. There are inherent biases, blind spots, and social advantages that are unavoidable, and therefore have to be intentionally addressed and overcome.

White supremacy has been spoon fed to all of us. So if even Black people have to willfully deprogram themselves from ascribing to a system that isn’t even built for them, that means white people — yes even white women — have to be even more mindful about disengaging from something that actually does benefit them.

READ MORE: Ayesha Curry claps back after flood of criticism over her comments on ‘feeling insecure’ on ‘Red Table Talk’ episode

For those who are like, “But Blue, they’ve been married for 42 years she was just defending her man,” my answer is: “So what?!”

Camille and Bill Cosby were married for more than 50 years when his scandal broke. Loving someone isn’t an excuse to turn a blind eye to their missteps, in fact many would argue that it’s actually a reason to be an even more rigorous accountability partner.

This is a bad look

While we’re discussing what a bad look this interview was, let’s also call out the pink elephant in the room — the optics are off.

In a time were racism is a hotly contested issue that’s inspired salty grown men to flood the streets carrying tiki torches, and #MeToo has us all re-examining the way we’ve normalized misogynistic behavior, this isn’t the time for a white woman, to tell the world that it’s time to get over a white man throwing a Black woman under the bus.

Like, even the dumbest, most un-woke celebrity knows (or has paid a publicist to know) how poorly that would be received in this climate. So it’s not only astounding but also a bit disconcerting, that Professor Jill Biden, who is a Doctor of Education in educational leadership, and who has traveled the world as our Second Lady for almost a decade, would drop the ball in such a sloppy way.

Do I think Joe Biden still has a chance of winning the Democratic nomination despite this scandal? Of course I do. The mistreatment of a Black woman in the 90’s isn’t gonna be enough to tank his campaign. However, if we stand a chance at winning the main election, his team, and his wife, need to tighten up their messaging, and make amends to all the Black women who are currently finding it hard to get excited about his campaign.