After generations of racist repute, Stone Mountain, Ga., works on rebranding itself

Both the town and the memorial associated with it conjures memories of racism, but officials want to shed that image and communicate that it is an inclusive, largely Black, place 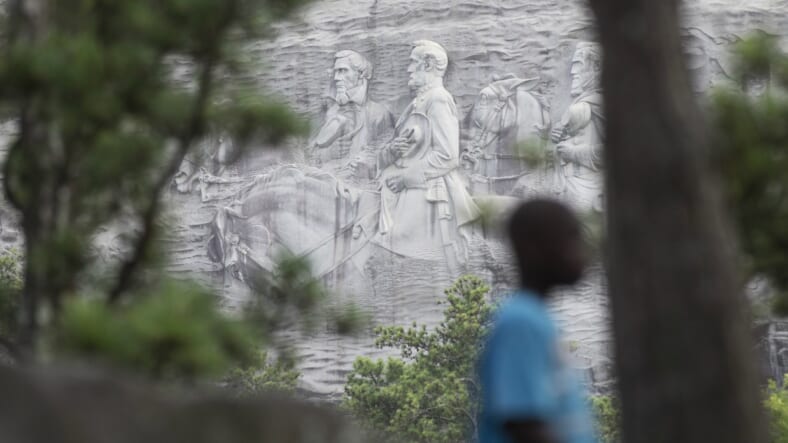 Georgia tourism officials are poised to help the Atlanta-area community of Stone Mountain shed its historically racist images, the Atlanta Journal-Constitution is reporting.

Back in 1915, the Ku Klux Klan founded its second incarnation at Stone Mountain. Soon after a movement to construct the memorial mountain carving was undertaken. The site was purchased from private owners in 1958 by Georgia as an homage to the confederacy. A 3,200-acre park was built around the mountain sculpture and has become one of Georgia’s biggest tourist attractions.

In more recent years, white supremacists and white nationalists toting Confederate flags rallied there. But today, the village of Stone Mountain is 70 percent Black and has shed its history of demonstrations of racism, officials tell the AJC.

“When, historically, people think about Stone Mountain Village, it was this place that wasn’t really open to outside influences,” City Manager ChaQuias Miller-Thornton said. “We’re beyond that. We don’t want that to continue to be our narrative.”

To help with its rebranding, Stone Mountain has called in the Georgia Tourism Product Development Team, which spent Tuesday and Wednesday studying the community in-person, the AJC reports. The village is hoping that a more accurate message to the public will help fill the now-empty storefronts downtown and also help people see Stone Mountain as a welcoming, inclusive place.

Some people “don’t actually know that our largest population is African-American because that’s not been the voice,” Miller-Thornton said.

OPINION: Why Do Atlanta Police Killings Get Overlooked?

Resident Janie Rector told the newspaper that she can remember the older, less pleasant days of Stone Mountain. Back then, the historically Black part of town had dirt roads, she said.

“I was here as a little girl,” said Rector, 76. “I’m sure you’ve heard of the Klan coming through at that time. That was a time when you had to go in and stay in your house and just waited.”

In those days, a Black neighborhood known as Shermantown sprang up, boasting its own cemetery and a number of churches, the AJC reports.

All of that history, the good and the bad, should be preserved, Melissa Jest, a member of the state tourism team, told the news organization.

“Let’s just interpret it,” Jest said. “This is just an opportunity to zoom the lens out and tell a fuller story, good, bad and ugly.”