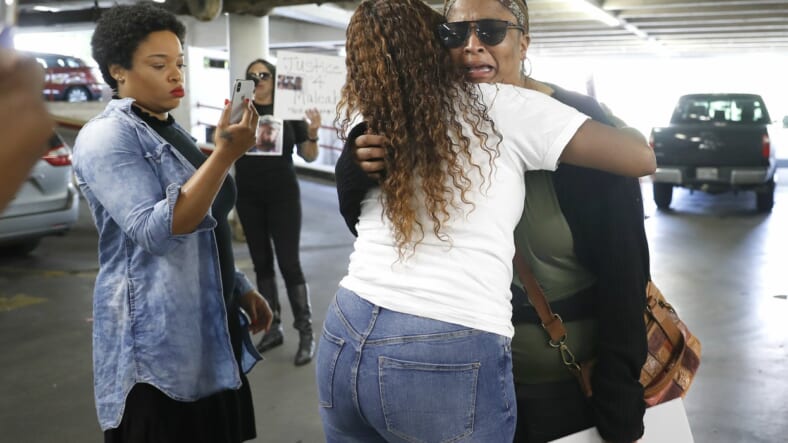 HOUSTON (AP) — The mother of a missing 4-year-old Texas girl was heckled outside a courtroom on Monday by people who questioned if she had done enough to protect her daughter before her disappearance.

Brittany Bowens, Maleah Davis’s mother, along with her spokesman, community activist Quanell X, showed up for a scheduled court hearing for Derion Vence, her former fiancé who is charged in connection with the girl’s disappearance. The hearing was canceled, though, and Vence’s next hearing was scheduled for July 10.

Tom Burton, Vence’s attorney, said he couldn’t comment because he hadn’t seen any of the evidence in the case.

Vence, 26, has been charged with tampering with evidence, specifically a human corpse, though Maleah is still missing and authorities have declined to say whether they believe she is dead or Vence may have killed her. Prosecutors, though, have said in court documents that Vence eventually could face additional charges, including murder.

Bowens declined to speak after the canceled hearing, but Quanell X told reporters that Bowens is focused on finding out what happened to her daughter.

“The main thing right now that all of us want to know is what did he do with Maleah,” he said. “Where is Maleah?”

As Quanell X spoke to reporters, he was drowned out by a group of people, including some family members of Maleah’s father who yelled “she let it happen” and “Brittany knew all along.”

Quanell X previously alleged that Vence might have abused Maleah and that Bowens should have told police about it.

Child Protective Services removed Maleah and her brothers from the apartment Vence and Bowens shared in August after the girl suffered a head wound, but the children were returned in February, according to an agency spokeswoman.

When asked by reporters why — if she had concerns about Vence — Bowens had left her daughter in Vence’s care while Bowens attended her father’s funeral out of state, Quanell X declined to comment, saying, “I’m not going to speak to that.”

As Bowens and Quanell X headed to an elevator, they were followed by the hecklers, who yelled, “Justice for Maleah” and “murderer.”

Tamisha Mendoza, a cousin of Maleah’s father, Craig Davis, said she questioned why Bowens stayed with Vence if she suspected he was hurting her daughter.

“You’re just as guilty as (Vence). She needs to be locked up along with him,” Mendoza said.

Craig Davis didn’t attend the scheduled hearing because “he is devastated” about what happened to his daughter, Mendoza said.

“Maleah was a happy little girl,” she said. “The things that happened to her, she didn’t deserve.”

According to police, Vence told officers that he, Maleah and his 2-year-old son were abducted on May 4 by a group of men in a truck. He said he and his son were freed the next day but the kidnappers kept Maleah and his silver Nissan Altima.

The Nissan was found on Thursday and trained dogs detected the scent of human decomposition in the trunk.

Vence was seen on surveillance video taking a large laundry basket with a trash bag as well as cleaning supplies from his apartment on May 3. A basket similar to the one seen on the surveillance video was found in the Nissan’s trunk.

Investigators also found blood in the hallway and bathroom of Bowens and Vence’s apartment. The blood is consistent with DNA samples taken from Maleah’s toothbrush, authorities said.