Baytown, Tex. police say a tussle over the officer's taser escalated into the fatal shooting of a 44-year-old woman who may have had mental health issues 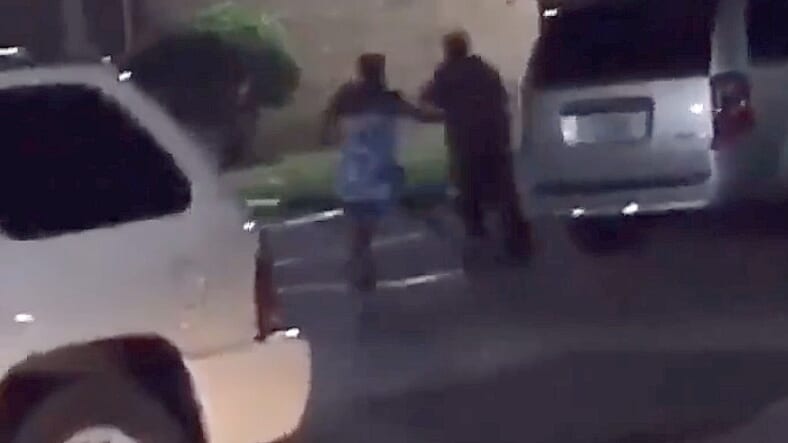 An officer confronts a woman in Baytown, Tex., before they wrestle over his taser, resulting in him shooting her to death. (KHOU)

A shocking and violent video showing a suburban Houston police officer fatally shooting a Black woman who yelled “I’m pregnant” right before he fired at her in an attempt to arrest her for outstanding warrants.

The officer reportedly had a previous interaction with the woman, said Baytown, Tex., Police Lt. Steve Dorris, according to KHOU-TV. The woman, identified as Pamela Turner, 44, allegedly had outstanding warrants which led the officer to try to arrest her.

In the incident it appears on the video that the woman tussled with the officer which caused him to use his taser. However, police say as the officer tased the woman, she then gained control of his taser and tried to fire it at the officer. The officer then fired multiple shots, killing the woman.

The officer then tried to perform CPR on the woman, according to witnesses but she died at the scene, Dorris added.

In the video, which was shot at night, it is not apparently clear that Turner got hold of the officer’s taser. Also it is unclear who shot the video.

“If somebody takes your Taser away from you and starts tasing you, there’s a very good likelihood that this is going to escalate and get very bad for the officer from there,” Dorris told reporters.

READ MORE: S.C. sheriff and deputies indicted for allegedly using excessive force — then trying to cover it up

A woman who said she is Turner’s niece told KHOU that Turner has suffered with mental health issues and that her claim of being pregnant was not true. Dorris also confirmed to the station that she was not, in fact, pregnant.

Some witnesses reported to CBS that the woman may have had mental issues.

“Sometimes you would see her, you know, get into it with people around the apartments, but nothing too, you know, bad,” Raquel Cuellar said. “It’s just, you know, just typical her. She’s not a bad person. She didn’t hurt nobody.”

“This is the first shooting the officer has been involved in,” Dorris said about the officer who is an 11-year veteran, but whose name has not yet been released.

Although the bystander’s video has been circulating on social media and was met with huge backlash, Dorris said the officer’s body cam video won’t be released just yet as the investigation continues.

“It’s unfortunate that somebody takes a tragic incident like this and starts posting it on social media,” said Dorris. “It’s extremely disrespectful for everybody involved. But that’s the day and age we live in with social media.”