S.C. sheriff and deputies indicted for allegedly using excessive force — then trying to cover it up

Three law enforcement officers are accused of not only unlawfully subduing a man who was breaking no laws, but trying to hide the evidence 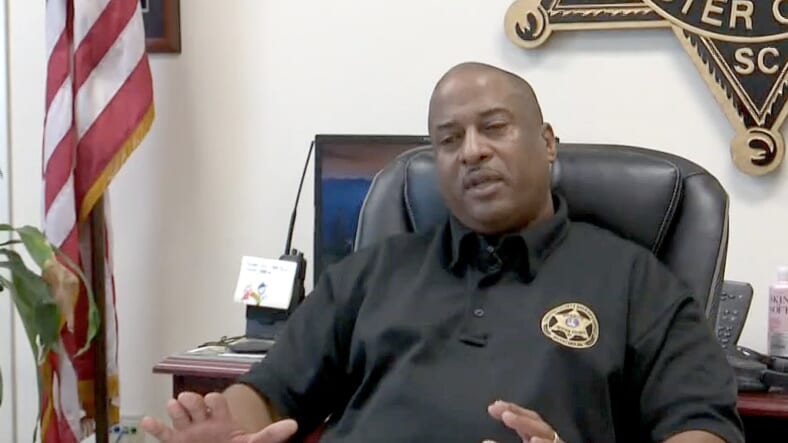 A South Carolina sheriff and two deputies are charged with using excessive force and then working together to cover up their alleged crime, although they were caught on camera, The Charleston Post and Courier reports.

On Tuesday, Chester County Sheriff Alex Underwood and two other ranking officers were indicted by a grand jury for the use of excessive force on a man who was live-streaming a car wreck.

“It is paramount that law enforcement maintain the trust of the public which it serves,” said Jody Norris, FBI special agent in charge, after the indictment. “These charges are a reminder that nobody is above the law.”

According to The Post and Courier, the incident is the 13th time in the last decade that a sheriff in Chester County has been charged with failure to uphold laws. It also coincides with the state grand jury indictment of Florence County Sheriff Kenney Boone last month on embezzlement and misconduct charges.

The sheriffs are under fire for a Nov. 20, 2018 confrontation with Kevin Simpson, 26, who was taping the scene of a car crash live as emergency vehicles responded outside his home near Chester.

Underwood appears on video ordering the man to go to his porch. Simpson did comply but also yelled “manhunt” as Underwood walked away which upset the sheriff and compelled him to grab Simpson, who apparently didn’t break any laws.

Simpson was then reportedly wrestled to the ground by Deputy Lt. Johnny Neal, injuring the man’s head and elbow.

Simpson was arrested on charges of disorderly conduct and resisting arrest.

According to the indictment, when Sheriff Underwood and Chief Deputy Robert Sprouse realized that Simpson had live-streamed the whole confrontation, they conspired to cover it up and got a search warrant for his home, claiming that a radio had gone missing.

During the search they reportedly illegally took Simpson’s cell phone and tried to destroy it or “impair its integrity or availability” in a federal investigation, the indictments said.

The indictment also state that Neal and Sprouse made a false report against Simpson saying he used vulgar language during the arrest. They also conspired to hold Simpson in jail for three days and allegedly worked together, using their position, to intimidate witnesses.

“Those who swear to protect and uphold the law, while at the same time using their positions of power to hide their own violations of the law, will be held accountable,” U.S. Attorney Sherri Lydon said in a statement announcing the eight-count indictment.

Last Wednesday, Simpson said he “knew something was wrong with the system. It’s time for a stop.”

“We feel confident that the wheels of justice will continue to turn for Mr. Simpson and his family,” his attorney, Everett Stubbs III said.

After the indictments came down, South Carolina Gov. Henry McMaster put Underwood under suspension and replaced him with State Law Enforcement Division Capt. Donald “Max” Dorsey to serve in the interim, The Post and Courier reports.