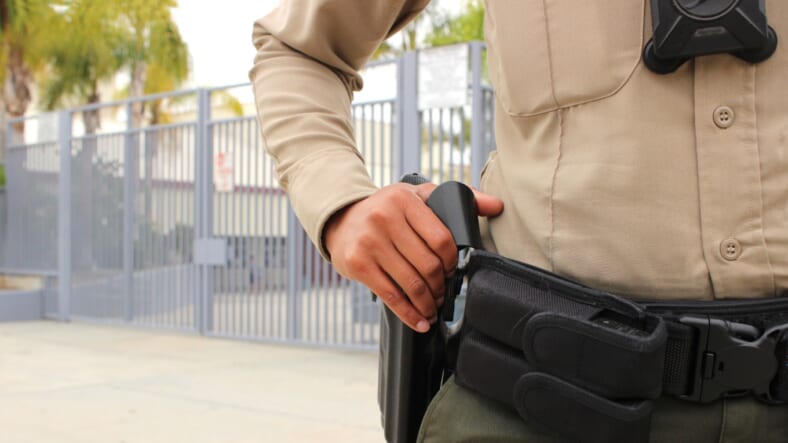 A Black man in Texas wants the constable deputy who racially profiled him to be fired after their terrifying encounter went viral.

According to ABC News, On May 8th, Clarence Evans was in the driveway of his Houston home with his wife, 6-year-old son, and 1-year-old daughter, when he was bizarrely mistaken for a fugitive wanted in Louisiana.

Fortunately, during the height of the confusion, Evans’ wife pulled out her cellphone and began recording the altercation. He later posted the video on Facebook where it was viewed over twenty thousand times and has since made the rounds all over social media.

“That officer needs to be fired,” Evans told ABC News on Thursday. “I don’t understand how he’s still an officer of the law.”

“At the time, my dog was in the house,” he continued. “I’m breeding my dog so I thought he was stopping to ask about some puppies or something. So, I didn’t think nothing of it.”

Things went left after the deputy began asking him what his name was and forcibly grabbed him by the right arm.

“He grabbed me and told me, ‘No, I already know your name … and you’ve got a warrant out of Louisiana,” said Evans.

At one point the deputy called him “Quentin” even after Evans and his wife both clarified that wasn’t his name and he’d never lived in Louisiana.

Fortunately, eventually another constable deputy pulled up to Evans’ home with his lights and siren on. And when he walked over to compare Evans to the picture of the fugitive, he agreed they were not the same person.

Despite public support for the father of two, this week, Mark Herman, the Harris County Constable for Precinct 4 where the deputy works, blamed the 39 year old for escalating the situation because he did not comply with the officer’s request to hand over his id.

In reference to the video Evans posted on social media, Herman said, “This individual chose to cuss out the deputy and not cooperate with a law enforcement investigation.”