This girl is #GOALS for so many reasons. 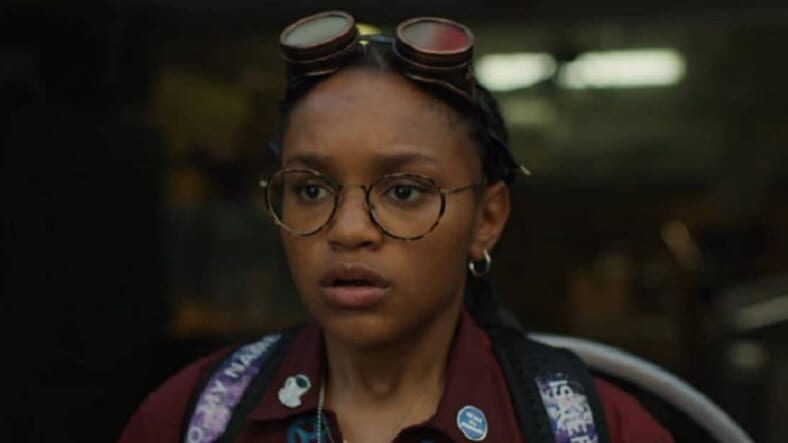 In See You Yesterday, High school best friends and science prodigies C.J. (Eden Duncan-Smith) and Sebastian (Dante Crichlow) spend every spare minute working on their latest homemade invention: backpacks that enable time travel. But when C.J.’s older brother Calvin dies after an encounter with police officers, the young duo decide to put their unfinished tech to use in a desperate bid to save Calvin. From director Stefon Bristol and producer Spike Lee comes See You Yesterday, a sci-fi adventure grounded in familial love, cultural divides and the universal urge to change the wrongs of the past.

There are plenty of reasons to love the sci-fi flick that is innovative, entertaining, and enlightening but the lead actress’ near-perfect performance as a Brooklyn-born teen with a knack for science is our favorite part.

We caught up with the actress who won us over with her tough-talking exterior, natural beauty, and brains to match to find out how she handled such an amazing role and we learned that her acting skills are just one of her many talents. It turns out, she’s the epitome of #BlackGirlMagic.

Here are 5 fascinating facts about our new fave:

She’s real-life besties with her co-star.

If you thought the chemistry between C.J. and Sebastian in See You Yesterday seemed super realistic that’s because it was. Dante Crichlow and Eden Duncan-Smith have been BFFs since they were babies.

“I’ve known him ever since the day I was born. He is my best friend and my brother,” she says of her co-star. “I am very passionate person and I’m a hot head. I can get very angry, very easily and whenever Dante is around he nips it in the bud. He’s the water to my fire.  He just puts me out and he always is around to try and cool things down. He make me happy and makes sure that the environment [we are in] is good for me. I think that aspect between Sebastian and C.J. is very much a real life aspect between me and Dante.”

Although Eden Duncan-Smith may seem like a fresh face on the scene, she has been scoring major roles for quite a while. After training at the prestigious Dance Theatre of Harlem and the American Ballet Theatre, she starred on Broadway’s Fences alongside Viola Davis in 2010 and held her own as a cast member in Broadway’s The Lion King in 2011. She starred opposite Jamie Foxx and Quvenzhané Wallis in 2014 remake of Annie. You also may remember her from her stint on Netflix’s Roxanne Roxanne or as a young Lena Waithe in the Emmy Award-winning episode of Master of None.

As if her acting talents aren’t impressive enough, this girl’s got brains to match. She’s currently a physics major at Hampton University and plans to pursue a career in the science field while maintaining her career as a performer. “I believe that there is no limit to what anyone can do with anything. I think there are ways to interweave both of passions into my career.  Where I can be an actress, I will try to incorporate science and as a scientist incorporate the arts. I strive to incorporate those two aspects of my life into whatever I do,” she says. “They both can really help with a lot of the resolutions that we need for the earth and for society. I think that the education that I got in both field will really help me throughout life. By not having to choose between two paths that I’m passionate about, I believe that I will be able to help the greater good.”

Her tribe is tight.

While it’s hard to imagine anyone being able to balance an acting career with a demanding school schedule, Eden Duncan-Smith is able to pull it off thanks to her close-knit friends and family.

“I’m very dependent on the people that I surround myself with. They help me out with everything. My mother helps me with things like emails, while my dad helps me with editing  auditions and getting them submitted. My managers, Priya Satiani and Brian Sacripanti and my agent Shirley Faison really look out for me and work on the things that are happening in that world,” she explains. “I am able to focus on my school work and focus on research, and really delve into the science world so that I can get.  My team is really who I depend on, and really who I lean on to to help me in this moment. It’s amazing.”

She has learned from the best.

The actress had held court with some pretty major talents and she says she got some great advice from Viola Davis,  Nia Long and the late Ruby Dee.

“One thing Viola Davis always said to me and one thing that keeps coming up is that no matter how much someone will disrespect you in this industry, because it will happen, don’t don’t hold back on on what you think you should have. If they just don’t give it to you, then don’t think you’re any less worthy of the things that you feel you deserve. You worked for what you have. You have the training, you have the experience, you have the resume you earned,” she says. “She also told me that I can never move to the next project, if I am holding to closely to one particular role. I have to be open to advance to the next opportunity.”

Nia Long gave her some wise words as well. “Don’t let someone tell you that you are too much or that you are b-word or whatever.  This is your life and how you live it is up to you. Always know your value.”

Lastly the late great Ruby Dee told her at the age of ten, never to focus on other people’s work. Dee told her, “If you are looking at what someone else is doing, you will miss what you have been called to do. Focus on what the universe presents to you.”

See You Yesterday is available now on Netflix.