The five young men of Netflix's "When They See Us" share powerful thoughts hard how it is to be Black boys in America. 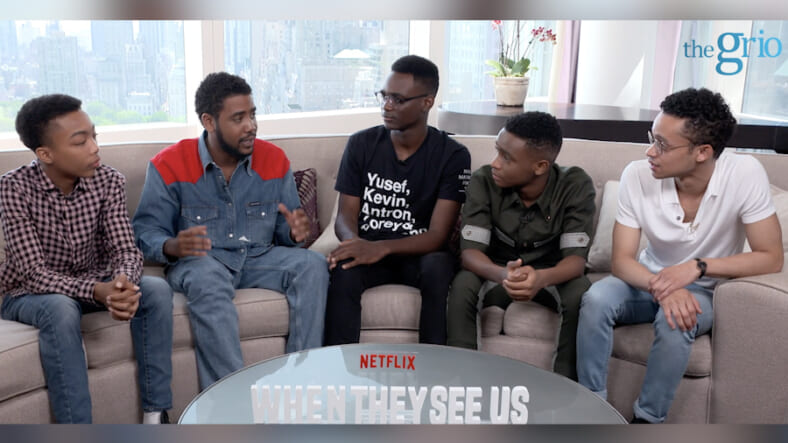 Asante Blackk, Jharrel Jerome, Ethan Herisse, Caleel Harris and Marquis Rodriguez talk about their roles in the upcoming Netflix series about the Central Park Five, “When They See Us” (theGrio/Netflix)

The young actors who portray the Central Park Five in Ava DuVernay‘s Netflix limited series, “When They See Us,” say that as Black boys in America, they don’t get to be kids in the way that other boys do.

“When They See Us” revisits the story of five teenagers who were wrongfully convicted of raping a jogger in Central Park back in 1989, and their years-long fight for justice.

In an interview with theGrio, all five actors reflected on the question of what it’s like to be young Black men, in a country that historically has criminalized the bodies of Black boys, from Emmett Till to Trayvon Martin.

‘[I want to be seen as] just another person with like dreams and aspirations,” says Ethan Herrise, 18, who plays a young Yusef Salaam in the movie.  “To be looked at and seen like ‘I wonder what that kid like wants to be when he grows up?’ Rather than like ‘Oh what is that thug planning on doing later today?'”

“Because that’s exactly what happened with these men,” Herisse explains about the harrowing real life story that captured the nation’s attention in 1989. “They had dreams. Kevin wanted to play trumpet. Antron wanted to be an aspiring baseball player and Yusef wanted to be like a rapper. And all of that was robbed from them when they were just teenagers.”

“I just want to be a boy, not a Black boy,” says actor Jharrel Jerome, 21, who also starred in the Academy Award-winning film Moonlight. He plays the role of Korey Wise, the only one of the Central Park Five sent to adult prison, where he endured horrendous abuse.

Jerome’s answer to the question fittingly points to the loss of innocence young Black men in America experience when their childhood is stripped from them, a phenomenon backed up by numerous psychological studies.

“You don’t question what you think about the white boy,” Jerome explains. “I just want to be a boy.“

For actor Marquis Rodriguez, who stars as a young Raymond Santana, one of the first of the Central Park Five to be arrested by NYPD, the perception of Black and LatinX boys is often predetermined before they open their mouths.

“I want us to be able to live outside of people’s imaginations,” Rodriguez tells theGrio.  “To be allowed the same freedom to make an impression and to be like just who we are first before anything is decided.”

“I want people to be able to completely step outside of their biases and just see us for who we are,” says Asante Blackk, who plays Kevin Richardson, the youngest of the Central Park Five, arrested at 14 years old. “Really, see us for the multi layered, complex human beings that we are.”

All five actors say the time they spent with the real-life Central Park Five, helped them form a brotherhood they will never forget, and a mission to make the Netflix series impactful.

“We are just coming together with this same mindset,” says Jerome. “We’re doing this for these men. So we look at each other [and] we’re like damn: we’re so young, we’re so lucky, we’re so blessed to be here. ”

Watch the full interview clip with the cast above and catch “When They See Us” on Netflix, May 31.