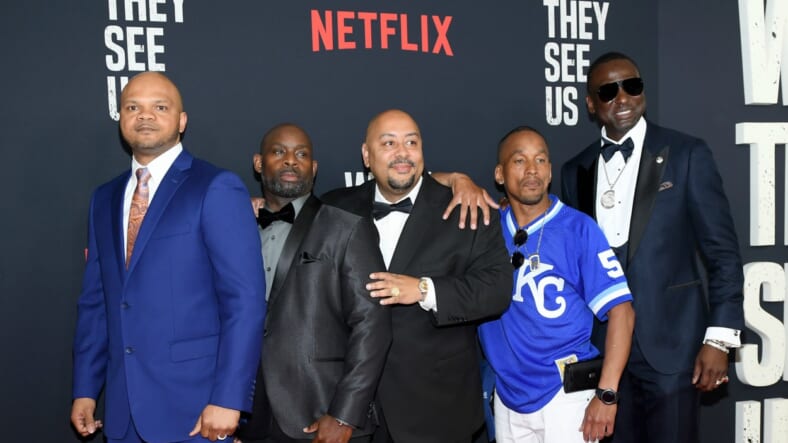 Kevin Richardson, Antron Mccray, Raymond Santana Jr., Korey Wise, and Yusef Salaam attend the World Premiere of Netflix’s “When They See Us” at the Apollo Theater on May 20, 2019 in New York City. (Photo by Dimitrios Kambouris/Getty Images)

Political commentator Van Jones is usually cool as a cucumber when discussing social justice issues, but this week, a CNN panel he was part of erupted into chaos when the topic of Donald Trump’s previous attacks on the Central Park Five came up.

According to Mediaite, on Monday, Jones and fellow pundit Steve Cortes were making an appearance on Cuomo Prime Time when the subject turned to the case of the infamous 1989 New York rape case, that led to the arrest of five Black and Latino boys who spent years incarcerated before their eventual exoneration.

The discussion was heated to begin with but went entirely off the rails after Cortes seemed to question the innocence of the five men who were proven to be erroneously convicted after an inmate confessed to the crime in 2002.

In the five years since the Central Park Five were cleared of all charges and settled a $41 million civil rights lawsuit for a wrongful imprisonment, many have taken the president to task, for buying a full-page New York Times ad back in 1989 calling for the death penalty to be reinstated.

On May 1, 1989, Donald Trump took out full-page advertisements in four New York newspapers including the New York Times calling for the death penalty for the five boys accused in the Central Park Jogger case. (Courtesy of Twitter.)

Critics say the fact that this extreme measure was taken less than two weeks after the five teenagers were even arrested makes it even more egregious and hints at racial bias. But Trump has adamantly refused to apologize and even dismissed the civil rights settlement as “outrageous.”

EXCLUSIVE: Raymond Santana of the Central Park Five responds to Trump’s hypocritical call for due process

“I would love to get into the facts of that night… because they are not nearly as exculpatory as you might want to believe,” said Cortes, after Cuomo brought up the president’s lack of remorse for his previous actions.

It’s worth mentioning that aside from being a a CNN commentator, Cortes is also a former member of Trump’s Hispanic advisory council. As soon as he implied the men in this case were guilty, Jones aggressively shut him down, saying “no” 20 times in a row.

“You can’t just say no a thousand times and not let me talk,” Cortes barked.

“I’m not going to let you lie,” Jones shot back. “This is disgusting on your part.”

When Cortes had been interrupted yet again by Jones he asked, “Can I talk?!”

To which the criminal justice reform advocate curtly responded, “Nope, not on this.”