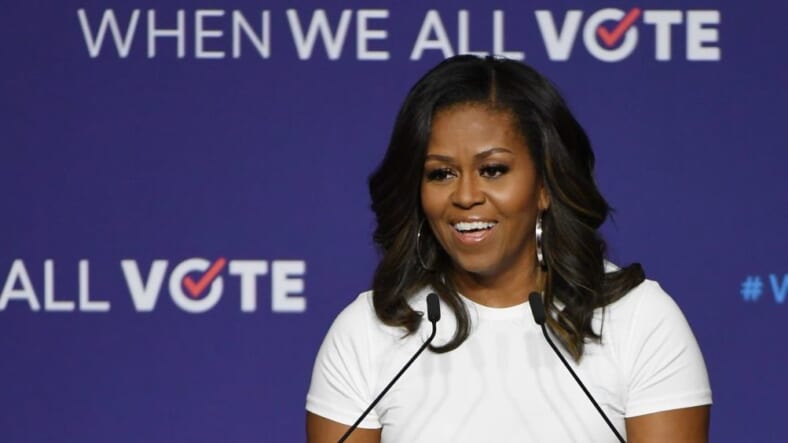 Former first lady Michelle Obama speaks during a rally for When We All Vote's National Week of Action at Chaparral High School on September 23, 2018 in Las Vegas, Nevada. Obama is the founder and a co-chairwoman of the organization that aims to help people register and to vote. Early voting for the 2018 midterm elections in Nevada begins on October 20. (Photo by Ethan Miller/Getty Images)

This week, a former West Virginia county official, who made headlines in 2016 for making racist remarks online about then-First Lady Michelle Obama, is going to the slammer after being sentenced to prison time for misappropriating funds.

According to WSAZ, Pamela Ramsey Taylor, the former director at the Clay County Development Corporation, a West Virginia-based elderly non-profit group, was fined $10,000 on Thursday and sentenced to 10 months in federal prison.

Taylor admitted to authorities that she embezzled disaster relief funds by falsely registering for Federal Emergency Management Agency (FEMA) disaster benefits. Her sentence also mandates that she be confined to her home for two months after her release and remain under federal supervision for another three years. In addition to her sentence, she must pay restitution of an additional $18,149.04.

Prior to her confession, investigators discovered the 57-year old had falsely claimed her primary residence was damaged during a 2016 flood in West Virginia which ultimately killed 23 people, forcing her to stay in a rental unit, reports WSAZ.

“It will be refreshing to have a classy, beautiful, dignified First Lady in the White House. I’m tired of seeing an ape in heels,” Taylor opined in the post. In response, Beverly Whaling, who was the mayor of Clay County at the time, wrote back, “Just made my day Pam.”

The exchange between the two government officials was shared thousands of times, resulting in a petition demanding that both women be fired. Taylor ultimately deleted the post and replaced it with an apology, while Whaling eventually resigned as mayor.

After she plead guilty to the fraud charges back in February, U.S. Attorney Mike Stuart’s office released a statement saying, “Stealing critical FEMA dollars is a crime – literally and figuratively.”

Adding, “Taylor’s fraud scheme diverted disaster benefits from our most desperate and vulnerable, those most in need of help.”