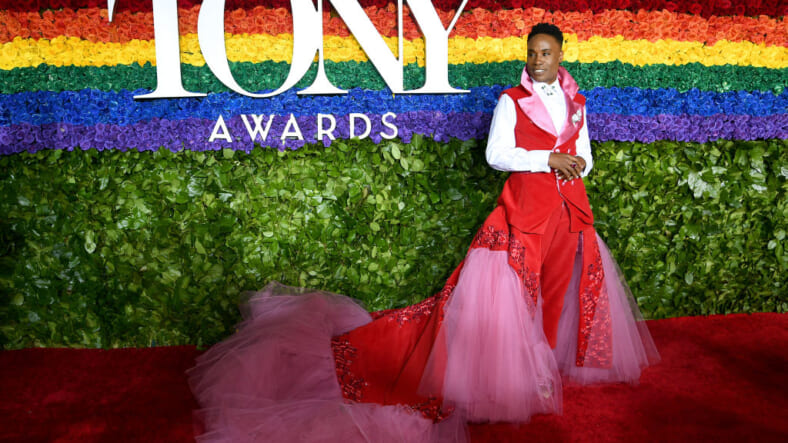 Billy Porter unapologetically knows no bounds, whether it’s dazzling in an over-the-top couture gown on the red carpet or belting out a robust rendition of “Everything’s Coming Up Roses” from Gypsy at the Tony’s.

The category is: Fierce and Fabulous!

Porter stole the red carpet arriving in a custom red and pink ensemble by Celestino Couture that incorporated the crimson velvet curtain from Broadway’s “Kinky Boots,” for which Porter won the Tony for best actor in a musical back in 2013.

And the Pose star had an important message to share.

Described by the designer as a “gender-fluid evening suit” shimmering with over 30,000 Swarovski crystals, the show-stopping creation was an embroidered motif of female reproductive organs to support women’s abortion rights.

“It’s a beautiful nod to Elizabethan couture,” Porter told The Hollywood Reporter.  “At the fitting, we spoke about making a pattern on the train that was in the shape of a uterus, but not obvious, of course. And I thought it was awesome because women’s rights are under attack right now. I’m an advocate for all who are disenfranchised. None of us are free until we’re all free!”

He continued: “I really want to make sure that I’m showing up for all of the disenfranchised people I can so that we can find power in our unity. This government is trying to take away the woman’s right to choose and that’s unacceptable. No!”

Porter accessorized with a 25-carat ring and diamond bracelet from Oscar Heyman and stunning shoes from Orel Brodt.

And it was Porter’s time to shine when Tony Awards host James Corden plucked him out of the audience to sing a karaoke-style Broadway tune on Sunday, Vulture reported.

All this occurred during the commercial break so viewers at home missed Porter’s delightful, impromptu entertainment.

Yes. @theebillyporter is Gypsy. You didnt see this on #cbs! ? I think Billy just got the part of the 2020 revival! #TonyAwards pic.twitter.com/PLtYHLPGij