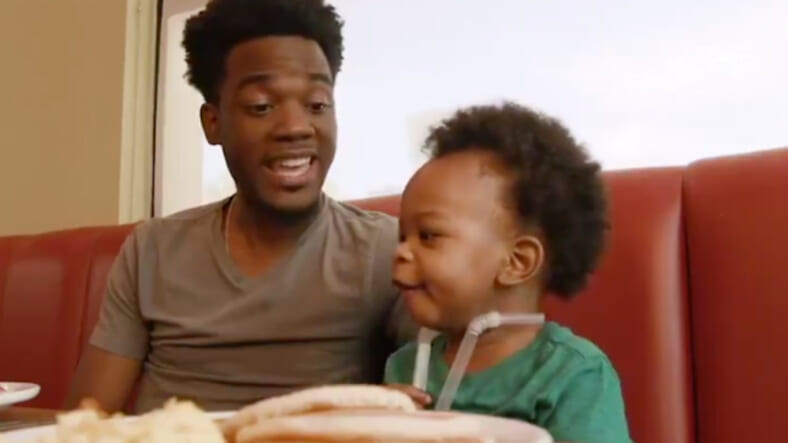 After father and son go viral Denny's stepped in with an offer they couldn't refuse. (Denny's)

Remember the babbling baby and his dad who broke the internet with their cute conversation? Well, the two have been tapped by Denny’s restaurant for a commercial which has the same heart-warming effect of adorableness that made us fall in love with DJ Pryor and 19-month-old Baby Kingston in the first place.

Just a week ago the video of the two had taken over the internet and went viral with DJ engaged in a conversation of something with his very talkative little tyke.

The father-son duo are seated on the couch and the baby talks in gibberish while his dad rolls right along answering the baby’s questions.

“They need to work on that, right?” Dad says.

“Did you understand it, though?” Dad asks.

Their conversation is the cutest thing as Kingston engages his father and even makes hand motions like a grownup would do, clearly to express that he’s got some pretty deep thoughts to share.

The kid kinda knew exactly what he was saying, and apparently so did his dad. The rest of us didn’t understand a blurb but we were still in awe at the adorable conversation that gave us all kinds of feels.

Clearly Denny’s fell in love too and served up a deal they couldn’t refuse.

find cute baby from viral video and bring him to Denny’s … ✅ pic.twitter.com/f6BvdfnzaB

“What’s going on in your life, huh?” DJ asks his son in the commercial.

We Partnered With Our Favorite Spot @Dennysdiner to have a Little Booth Chat! Very Important For Father Son Bonding ???? HAPPY FATHERS DAY!!!! From Mine to Yours!! Go Get A Grand Slam from Denny’s! Love Y’all!!!”

DJ, who is a comedian, and his wife Shanieke, who posted the original viral clip, are also proud parents to 8-year-old Jabari, with his wife and reside in Clarksville, Tennessee.

Thanks to all the viral support, DJ’s reportedly considering adding his talkative tot to his comedy routines.