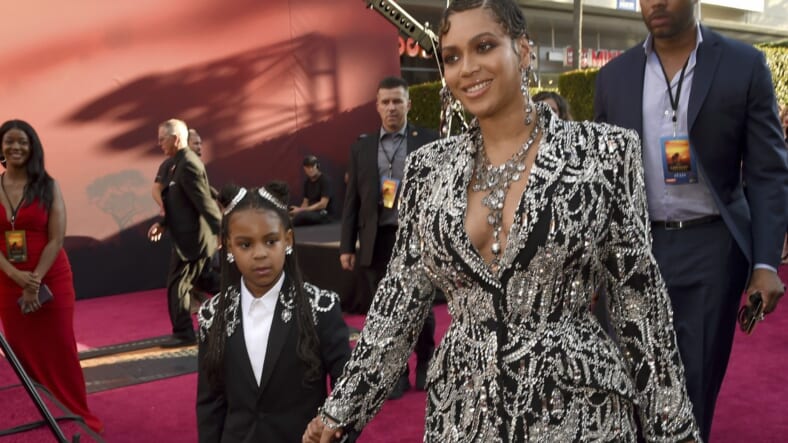 Beyonce, right, and her daughter Blue Ivy Carter arrive at the world premiere of “The Lion King” on Tuesday, July 9, 2019, at the Dolby Theatre in Los Angeles. (Photo by Chris Pizzello/Invision/AP)
Beyonce does everything big and over-the-top so it’s fitting that the Queen Bee was caught on-site at the super exclusive Havasu Falls campsite at the Grand Canyon to film a music video.

On Wednesday, fresh off the red carpet from her The Lion King movie Hollywood premiere a day before, TMZ cameras caught Beyonce striking a pose at Havasu Falls with amazing views and a stunning waterfall behind her.

Reportedly Only 300 campers are allowed daily at the site while thousands more get turned away.

According to the outlet, Beyonce was granted rights to the land to film for a few hours and police were nearby to handle the crowds. While people normally get to the site by mule or foot, Beyonce was flown in by helicopter, stayed about five hours and flew out.

And baby Blue was by her side too.

The question here is, which such a magnificent view of nature, was Bey filming the video for her new Disney release “Spirit”?

On Tuesday night as stars from the upcoming movie hit the red carpet for the world premiere of the reimagined animated movie, Bey’s song “Spirit” from the album was released ahead of the “The Lion King: The Gift,” album which drops July 19, CNN reports.

With the much-hyped release of the new remake of The Lion King coming soon, Beyoncé and Disney collaborated to produce a companion album “steeped in the sounds of Africa.”

The Lion King will be released in theaters everywhere July 19.