Cardi B claps back at Jermaine Dupri over ‘stripper rappers’ comments 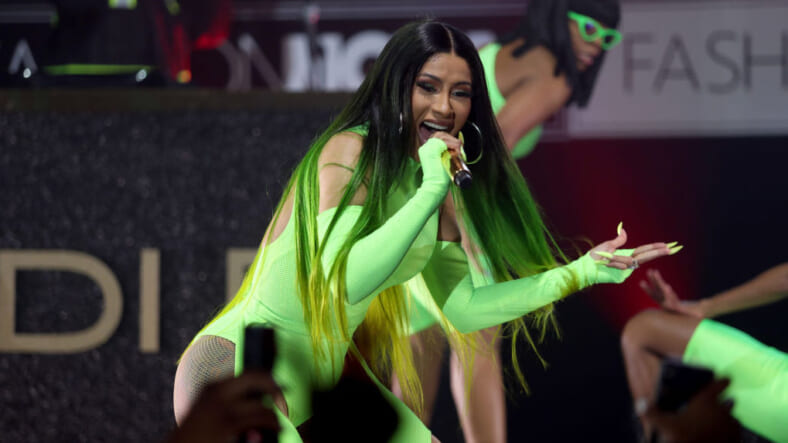 (Photo by Jerritt Clark/Getty Images for Fashion Nova)
Cardi B clapped back at music producer Jermaine Dupri for taking issue with today’s hottest female rappers by calling them strippers who rap.

Ahead of his new WE TV documentary ‘The Remarkable Rise Of So So Def’ July 18, Dupri opened up to PEOPLE Now about today’s leading ladies in rap and how their sexually-charged lyrical content differs from the time when his artist Da Brat became the first hip-hop female artist to go platinum in the 90s.

“Brat was the first female artist to go platinum, so we together broke the mold… and since then female rappers have been able to sustain and sell a lot of records, more records than guys, but before Brat that wasn’t happening,” he said.

When asked his opinion about rap artists like Cardi, Nicki Minaj and self-proclaimed hot-girl Meghan Thee Stallion, Dupri was dismissive.

“I can’t really say. I feel they’re all rapping about the same thing. I don’t think they’re showing us who’s the best rapper. For me, it’s like strippers rapping and as far as rap goes I’m not getting who’s the best.”

Dupri then suggested that female rappers “at some point” should talk about “other things.”

But Cardi, who has been pretty open about her past on the pole, took issue with the So So Def exec’s shade. She took to Instagram to explain that she talks about her sexual hind parts because it’s what her audience wants to hear.

“Okay guys I have seen a lot of people saying nowadays female rappers only talk about their p— and now that Jermaine Dupri brought it up I’m going to say something.”

“First of all, I rap about my p— because she’s my best friend and second of all it’s because it seems like that’s what people want to hear,” Cardi continued.

Cardi explained that she released a song, ‘Be Careful’ that wasn’t based on sex and her fans weren’t here for it.

“When I did ‘Be Careful‘ people was talking mad s— in the beginning like ‘What the f— is this?’ ‘This is not what I was expecting,’” Cardi said.

“It’s like if that’s what people ain’t trying to hear then I’m going to start rapping about my p— again,” she said.

Cardi then defended the female rappers whose lyrics aren’t about sex and don’t get industry support.

There are “female rappers who rap their asses off who don’t talk about their p— and y’all don’t support them. So don’t blame that on us when y’all not the ones who are supporting them.”

Cardi named rappers Rapsody, Tierra Whack, Oranicuhh and Kamaiyah, and noted them as female rappers who don’t get support.

“I feel we need to put these girls in more magazines and blogs. Radio DJs play these girls,” Cardi said.