Ben Carson defends, dances around Trump’s ‘Go back to your country’ comment on Fox News

No surprises here. The HUD Secretary says that the president's comments on Twitter were "misunderstood" and insists he is not a racist, despite how bluntly racist they came across 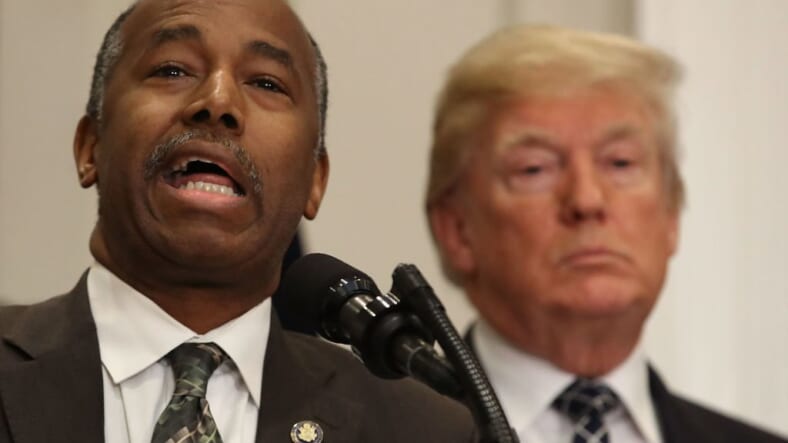 President Trump has all but poured gasoline on a racial brush fire over the past several days, and now Housing and Urban Development Secretary Ben Carson is being asked to answer on his boss’s behalf.

Wednesday, Carson appeared on Fox News and essentially suggested that the public had misunderstood what the president was saying when he made a racially charged jab against four nonwhite congresswomen.

During the segment, host Sandra Smith asked him to explain what Trump meant when he attacked Democratic Reps. Ilhan Omar, Alexandria Ocasio-Cortez, Ayanna Pressley, and Rashida Tlaib on Twitter and suggested they “go back” to their countries.

“Did you view the president’s tweets as racist?” inquired Smith.

“I have the advantage of knowing the president very well,” Carson replied. “And he’s not a racist. And his comments are not racist. But he loves the country very much and he has the feeling that those that represent the country should love it as well.”

“The president suggested that they could go back to their countries,” Smith continued after pointing out that three of the congresswomen were born in the U.S. and all four are U.S. citizens. “What did the president mean because he’s not taking back anything he said.”

“I think you can see what the president means by looking at his accomplishments,” Carson responded, failing to give a direct answer. “Under this president… you see low unemployment — record low for Blacks, for Hispanics, for all the demographics of our nation.”

“I think we should pay a lot more attention to what [the president is] doing than what anybody is saying,” he added.

The retired neurosurgeon also encouraged viewers to stop playing victim and pull themselves up by their bootstraps, stating, “I have to look at my own situation, born and growing up in dire poverty with a lot negativity around me, but also, recognizing that I lived in a place where, you know, through the help of my mother, who helped me to realize that I wasn’t a victim, that I had access to all kinds of things.

“And [I] was able to go on, become a neurosurgeon, now a cabinet member, and these are things that we want people to recognize in our nation and that’s why we want to create opportunities for them,” he said.

Meanwhile Trump has continued to double-down on his attacks on the four women, dubbed with the political moniker, “The Squad.” He accuses them of anti-American, rhetoric, siding with terrorist groups like al Qaeda, and making anti-semitic statements. In days afterward, he contended that he “doesn’t have a racist bone in my body.”

The House of Representatives has undertaken a resolution to condemn Trump’s statements, the Washington Post reports. The 240-to-187 vote was split between Democrats, who flatly blasted the president, and Republicans many of whom sided with him, if they said anything at all.