The controversy centered around Jay-Z's Roc Nation/NFL deal has been a fierce one, but Cardi says she has faith that Jay can help Kaep 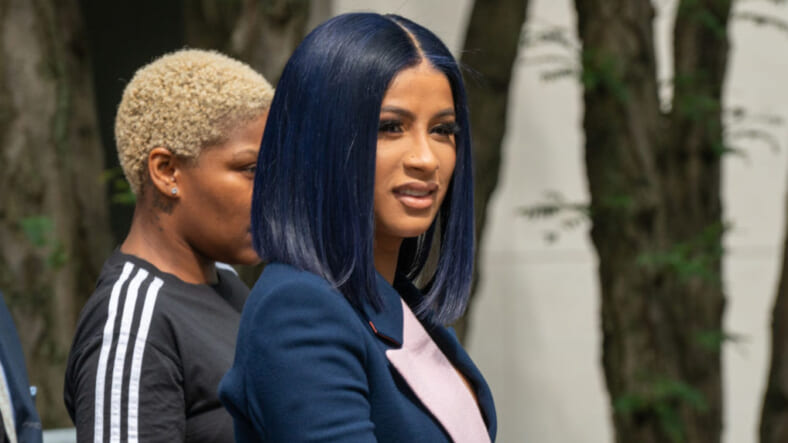 Last week when the NFL announced that Jay-Z’s company Roc Nation agency inked a deal with the league encompassing entertainment and social justice, the move sparked a fierce debate from fans, athletes and celebrities. Now Cardi B is chiming in with her two cents on if Jay Z’s actions are a betrayal to the community or a brilliant business move.

Over the weekend TMZ caught up with the Bronx native and when they asked her what she thought of Hov’s partnership with the NFL she didn’t mince words.

“I think that he can make a change,” she explains. “I don’t think he went [in] on an NFL deal without an agreement…I feel like he went in there like, ‘Alright, if y’all want me to work with y’all, y’all need to bring my peoples in there.’ ”

According to reports, Roc Nation will serve as co-producer of future Super Bowl Halftime shows, and also contribute to Inspire Change, a foundation the NFL started in response to public outrage over their mishandling of Colin Kaepernick’s peaceful #TakeTheKnee protest.

But while Kaepernick hasn’t directly addressed the hip hop mogul’s choice, both his friend Carolina Panthers safety Eric Reid, who supported Kaepernick through the entire protest  and his girlfriend, radio personality Nessa Diab, have both publicly slammed Jay’s tactics as “disgusting.”

“It’s typical for the NFL to buy different PR looks to cover up their dirt-that’s nothing new,” Nessa wrote in an Instagram post slamming the announcement. “But what is disgusting and disappointing is Jay-Z let them use him. Whether Jay-Z knew it or not (I don’t doubt his intelligence-so I would think he knew) he helped the NFL bury who he said is an iconic figure, Colin Kaepernick.”

Check out her clip below, the controversial NFL deal comes up around the interview’s 1:30 mark.

READ MORE: The Kaepernick Effect: Is Jay-Z’s new deal with the NFL a conflict of interests?